All I Ever Wanted to Be Was a Mother. I Spent Many Hours of My Youth Deciding Exactly How I Was Going to Raise All Those Children I Would Someday Have.

All I ever wanted to be was a mother. I spent many hours of my youth deciding exactly how I was going to raise all those children I would someday have. I would especially think about this during times when I was being punished or embarrassed by my own parents. "I'll never do that to my children!" This is the universal chant of all disgruntled youth.

One of the standards I knew that I would enforce in my home would be the absence of those stupid euphemisms that folks use for things they feel uncomfortable talking about. You know the words I'm referring to: poop, boob and butt. I would teach them the correct terms: bowel movement, breast, and derriere. I found it ridiculous that people would have difficulty using these words. After all, we are an enlightened society. We have certainly evolved into civilized adults. We are educated and needn't stoop to using silly names for perfectly normal parts and processes.

This was a great plan until I heard my daughters, Emily Kathryn and Roselie Shepherd, running after each other down the hall and calling each other Roselie Sheep Turd and Enema Catheter. Then, there was the time one of them announced in front of guests that her vagina hurt (she had a UTI). They grew to know my stand on using correct terminology, and as they grew older and more knowledgeable, they turned it on me, using the correct terms in inappropriate places and times. Those events devolved me back into the Stone Age and caused me to reconsider my stance on euphemisms altogether. What was once a parenting ideal, turned into an epic parenting failure. The whole thing was turned around on me and bit me in the ... gluteus maximus.

Here's my real question. The most offensive words fall under the umbrella of "adult language". You see that phrase as a warning on movies and music labels. Why isn't it called childish language when it is the language of second-graders and the uneducated? Who was it that made the rule that you couldn't use expletives until you were an adult? What kind of sense does that make? As if, it was a rite of passage. You can't shave your legs until you are 12, you can't have your ears pierced until you are 14, you can't date until you are 16, and you can't use profanity until you are 18. Most articulate adults I know would never speak such things, anyway. They manage to convey their thoughts through intelligible dialogue.

So, my mission here is to encourage you to use the term "childish, uneducated language" in place of "adult language" and push the movement along! 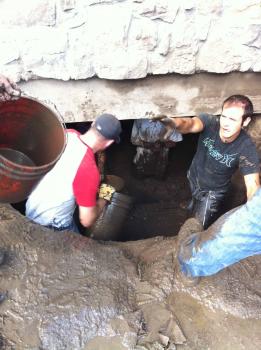 The Art of Dry Snitching