Are you passing racism along to your kids?

With racial tension in the news, I had to wonder, where do my values and attitudes fit in, and what are my children learning form me?

There are tests you can take to see if you are a racist. After you have answered the questions, your numbers are tallied and you are assigned a label. I couldn't make it past the first paragraph of the test I tried:

"All men are of the same general social construct except rednecks, mexicans and anyone from the projects ... " I didn't finish the questionnaire.

I am a dad and a redneck. I have a farmer's tan and a selection of work boots that I don, depending on the task at hand. I fit into a few other groups that can be made fun of, but they have never been an issue.

Officially I am from Idaho — a beautiful state not known for its social diversity. In fact, the qualifying question in my hometown is, "What do you want on your spuds, sour cream or gravy?" (Gravy fan).

I didn't learn to identify people based on which part of the planet they originated. I knew one girl with a last name of Watanabe, but it never occurred to me that she was from anywhere but down the street.

I am often caught off-guard by racial tensions, and I realized that I might be passing my ignorance along to my children. After all, I believe my kids are better than the next guy's. And, of course, my religion is the only true one.

I decided to look at several of the quizzes and answer a few of the questions I thought had merit. Feel free to answer the questions yourself or compare your answers to mine.

Do you notice someone's color, race or gender when they walk into a room?

Yes. I also notice the difference between a hamburger and a three-bean salad on my dinner plate. I notice a lot of things because I have eyes. So far so good.

Do you make racist jokes or remarks?

I have in the past. Sometimes I have found them humorous. I don't mind a good redneck or Idaho-boy joke as long as it isn't meant to hurt anyone. Historically, I have drawn the line there.

When you see a child of one race with a parent of another, what is your first thought?

When I see any baby of any race I think of diapers and I thank my stars that I am not having to change them.

How do you feel about participating in another culture other than yours?

I am from Idaho, remember, and there isn't much of a culture except for cow tipping and the aforementioned potatoes, so I am game for anything. And the more holidays, the better.

When you talk about racism, do you bring up Oprah Winfrey?

No. However, when I heard she would no longer produce her show I hoped the reason was so that she could spend a little time preparing for a run at the presidency.

Have you ever used the term "race card"?

Yes. I said it about Al Sharpton who I felt had the card laminated and duct-taped to his suit coat.

How do you feel when you hear poor english usage in a sports interview?

Is the implication here that athletes are not as educated or that sportsmen of certain races still speak street-talk? I will say that I notice when someone presents him or herself well and is articulate.

What does WoC stands for?

I am up on current events generally, but I have to say that I don't know. Let me Google it.

Have you ever used a derogatory term for someone's race, religion or gender in anger?

Not in anger, but to fit in or to be funny, yes. I'm not really proud of that.

Is it OK for older folk to be racist because that's how they were reared?

No. I have family that fall into this category and I don't excuse their behavior. If they offend anyone around us I will find a way to use humor to defuse the situation. Then I pull my dad aside and tell him that he can't call the guy oriental.

Finish this sentence: "People of are known for __."

As an exercise, I wrote down groups of all kinds and their general stereotypes and filled in the blanks. I'm glad I did. I acknowledge these stereotypes — including the ones for the categories that I fall into.

I am not color blind, nor am I oblivious to race, religion, sexual orientation, hair color or whatever else is being used to set people apart. Noticing that someone is a redheaded hispanic Mormon single parent from Lithuania, a tree-hugger and drives a Subaru means nothing unless I treat them differently because of it. I will teach my children the same thing.

Just got a memo that for upcoming Father's Day, my church group is going to celebrate by having everyone wear socks that don't match, and ugly ties. Fathers and ugly ties? How's that for a stereotype?

I know just the one. 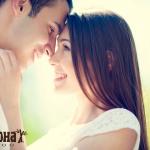 8 Ways to Fall in Love With Your…