Who Knew Something Seemingly Harmless Could Quickly Turn into Something so Dangerous?

Babies everywhere seem to be downing puffs snack food. The bite-sized snacks are great for little fingers just figuring out solid food. Plus, parents like the convenient, on-the-go packaging.

But one dad is sharing his scary tale about how eating puffs nearly cost his daughter her life - and how parents can avoid the same terrifying situation.

Justin Morrice posted the story on Facebook after his own daughter, Annabelle, began choking in her high chair while eating Gerber Lil' Crunchies, a cheese puff designed for babies.

"In less than 10 seconds I had turned to rinse her bowl in the sink," Morrice said on his Facebook post. "I turned back and saw her gasping for air. She was trying to cry but no sound was coming out."

Morrice said he immediately took Annabelle out of her high chair, turned her over and began slapping her back, as he had been taught. When he flipped her back over, her lips had turned blue.

He turned her around again and continued with forceful movements to clear his daughter's airways, but nothing was working.

"I thought my little girl was going to die in my arms," he said.

"I rammed my finger into her mouth and down her throat and was able to squish the cheesie enough that the next thing I heard was the sweetest sound in the world...her crying," Morrice said.

Once the "cheesie" was dislodged, he was able to scoop it out of her daughter's mouth. It was the longest minute of his life, he said.

Why did this snack cause a problem?

Morrice said Annabelle hadn't had a problem eating the cheese puffs just days before, so he didn't understand why it was a problem that day.

His mom, who came over to help him calm down after the scary experience, scanned the cheese puff can until she found a warning label written in small letters saying to throw contents out after five days of opening the seal.

"I opened a new container and I could not believe the difference," he said. "The ones in the can she choked on I can only describe to be like a foam ear plug. I could squish it but it would expand back out and would not break apart. The ones in the new can crumbled with ease."

A warning to all parents

Morrice said in his post he wasn't sharing this information to degrade Gerber, but to warn parents to always read labels.

"So many products post warning labels but unless you (sic) scan the product you can get 'lazy' as parents and it becomes routine," he said. 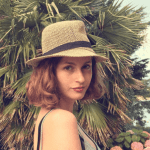