Be yourself: 5 reasons to drop the facade

It seems people are so quick to abandon their true selves in the hopes of fitting in or being a part of a perfect match. What's wrong with them simply being themselves? Here are five possible reasons you may want to rethink the facade.

Recently, a friend called desperate to speak with my husband. Turns out, she was going to a football game with her new boyfriend the next day and needed somebody to teach her everything there is to know about the sport. It seems the new boyfriend was under the impression my friend enjoyed the game of football as much as he. How did he get that impression? From her, of course.

It's the popular parlor game of pretending to be somebody one is not. While the short-term advantages of such antics may result in a prolonged relationship, the long-term effects evolve into being nothing more than an unsatisfying game of charades. Whether it's you pushing an image onto a potential partner, or the partner pushing his interests on you, here are five potential consequences for choosing not to be yourself.

1. You will be forced to hang out with people with whom you don't share common interests

There is a difference between discovering new interests through new relationships, and squelching the stuff that makes you who you are to accommodate another's interests. Just imagine how long an evening could be when you have absolutely no desire to learn the online playing capabilities of Xbox 360. You tried to love it. You tried to find common ground with his gamer friends. The question is, are you comfortable admitting it? A partner's social circle can either enhance or detract from the quality of a new relationship. If you are already trying to keep up appearances for one person, consider the difficulty of acting out a certain image for an entire group.

2. You can't move forward or progress

When your image is based on a false appearance, there is no growth. A genuine passion often acts as a springboard for other similar interests. So, an avid water skier may decide to explore wakeboarding which may evolve into doing tricks with an aerial bar. Wait! You were pretending to like waterskiing. However, he doesn't use his water skis anymore. Now where do you go? When there is no foundation supporting a genuine interest, your image will stale.

3. You are not using your true talents

Ironically, the stage of life when one is looking for a partner also happens to be the time spent discovering oneself. Keep in mind, the time available to develop one's talent is finite. I recall a college roommate who was gifted in biology. She attended school on a scholarship. Unfortunately, she was convinced her soul mate was the guy who spent his days playing guitar. He didn't like science. So, neither did she. Fast forward one year to a bold betrayal, a broken heart and a lost scholarship.

4. Your authentic self will resurface

It may be one month from now. It could remain dormant for 12 years. Nevertheless, know that your "real" self will not be ignored. At some point, it will emerge with a vengeance. Don't believe me? Visit the local bookstore and count how many self-help books offer advice to readers on how to rediscover their lost selves. For some, this self-abandonment was due to a love interest. For others, their genuine abilities had an isolating effect. The change brought on hopes of "fitting in." Whatever the motivation, know that one day your true self will want to be heard. Depending on how long you have been carrying out this facade, this lost voice trumpeting truth could have messy results.

5. There is only one you

I happen to believe that each of us has a plan. That plan's success relies on your personality, your unique collection of talents and your abilities. If you abandon that design in pursuit of another, you run the risk of losing your reward for living an authentic life. A common thread in the life stories of successful people is that they always knew they were destined to do what they do. Just imagine their story if they doubted their contribution to the world and allowed an outside influence to change them.

When asked the secret behind a career that spanned decades, a famous musician credited his huge success on the simple fact that he didn't know how to be anything else. He only knew how to be himself. That was enough.

Whether it is admitting you don't like football, fulfilling a lifelong dream of running a taco stand or telling your mom you actually enjoy watching "Keeping Up With the Kardashians," making the choice to be yourself and a commitment to celebrate yourself is the ultimate goal. The result is a life filled with genuine joy, a true sense of fulfillment and authentic happiness within yourself and the people whose lives you enrich.

J'Nel is a Contributing Editor at FamilyShare.com. When she isn't writing or editing, she is strongly encouraging uncooperative family members to pose for photos, golfing, playing outdoors or reading. While working on degrees in English and Social Work, she visited French Polynesia, parts of South America, Egypt, Indonesia, Europe, Thailand, Singapore, Hong Kong, and much of the United States. She remained in town long enough to earn a BA in English from the University of Utah. J'Nel's motto: Have suitcase. Will travel.
nextarticle 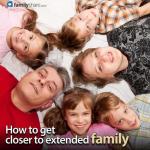 No Relocating Required: How to Get Closer to…