Blessings come after a trial of faith

Sometimes blessings don't come when we ask for them, but only after we have endured a trial of our faith.

Blessings don't always come right away. Sometimes we have to work for them and once in a while, that work means a trial of our faith.

All obedience to commandments and admonitions come with blessings; but not always right away. It's the same when we kneel and pray for certain blessings.

Occasionally, as people of faith, we learn some doctrine that is new to us. It may ignite us with a burning desire to obey. It also may not. We may struggle with the truth and even have a wrestle with God over it. Either way, obedience is necessary and whether we accept right away or take time to ponder and question, in the end, we will be blessed for our faithfulness to it.

When I was converted to my faith, I was 20 years old. There were certain things that came quite easily to me. There were things I had to give up and others I had to adopt and embrace. I was so excited to begin my new life as a new creature, but there were struggles that came along with that. One of them was tithes and offerings. I was a struggling single mom and barely made ends meet. The thought of taking 10 percent of my almost nothing and donating it was one I had a very hard time with. Here was my process:

I grumbled when I handed in that little envelope with my donation slip and hard earned cash. I thought of all the other things I could do with that money.

I accepted that this was part of the package and something I must do. I resented it, but did accept it.

I told God in my prayers that I was doing this because I had to, but I didn't want to and I'd better be blessed for it.

As I progressed in my faith, I learned what those donations went toward: new chapels, hymn books, curriculum aids and so many other things that kept the church running smoothly.

I grew to appreciate all that came from everyone doing their part and the privilege of having the means to donate.

It wasn't long before I began wanting to do so much more. In addition to my 10 percent tithing, I began to add small amounts for other causes.

What I gave was small compared to what I got back. Though I never had a lot of discretionary money to spend, I was able to meet my obligations. But that is not all. I realized the joy I felt now as I handed in my envelope of donations. They were small, but they made a difference.

This same process has been repeated so many times as I have grown in my faith.

As with doctrines and commandments, sometimes we don't really want to hear or adhere to the answers we receive in our prayers.

I was once engaged to a man I loved dearly. He taught me so much about myself, about my faith, about life in general. I couldn't wait to tie the knot. One day, a few weeks before our wedding, I got an uneasy feeling. That night, I hit my knees and asked what these feelings were about. Was I not to go through with my plans? Is that really what this meant? The answer came swiftly. "Don't marry this man."

Now an argument ensued. "What do you mean don't marry him? I love him. He loves me. How on earth can you prompt me at this last minute to not go through with it?" This was a bitter pill I had to swallow, but I knew I must be obedient to my answer.

With a broken heart, I ended the marriage plans, though we remain friends. It wasn't until the moment I did as I was instructed that I received the dozens of reasons why this marriage would not have been successful. After the trial of my faith, and through my obedience to a prompting of the spirit, along with a confirmation through prayer, I received the blessed assurance that I was doing the right thing and was even given the added blessing of knowing why.

Faith is a process. It is gained step by step, little by little, until we become that new creature who does not question. I am not quite there yet, but I continue on the path with a joyful heart.

As you grow and progress, you will still occasionally struggle with truths and commandments. But forge on, you must.

Here are the take-aways from my little story:

Be obedient, even if the reason you are doing it is just because you are supposed to.

Completely omit that step. By bargaining, we are questioning God's authority. Just accept his will.

Continue to be obedient until you understand why you are doing it.

Receive and embrace the enlightenment that always comes after the struggle.

Don't just stop at being obedient. Go the extra mile and seek opportunities to do more and serve more.

Send up a prayer of thanksgiving for the strength to do the right thing, for the enlightenment that follows, and for the blessings of being able to move forward in faith. 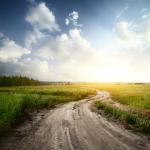