Can a flu shot increase your risk of miscarriage? Doctors reveal the answer

Every Woman Planning to Have a Baby Needs to Know This.

It's not just the approach of the flu season that has federal health officials saying every American should get a flu shot before Halloween, including women who are pregnant.

The annual message also comes in reaction to a study, published Sept. 25 in the journal Vaccine, that found pregnant women who had flu shots in the first trimester were more likely to miscarry than women who had not been vaccinated.

The findings surprised Wisconsin researchers who had previously published studies that showed no association between the flu shot and pregnancy. And they're worrying health officials, who fear some pregnant women will just read the headlines and not look more deeply into the research.

Despite the report, the nation's leading group of obstetricians says the vaccine is safe during pregnancy and remains an important part of prenatal care.

"In addition, maternal vaccination is the most effective strategy to protect newborns because the vaccine is not approved for use in infants younger than six months," Dr. Haywood Brown, president of the American College of Obstetricians and Gynecologists, said in a statement.

The U.S. Department of Health and Human Services is even more direct, saying, "Pregnant? Get a flu shot!" on its website. The CDC advises that every American 6 months and older get a flu shot each year, preferably before the end of October.

But mothers-to-be who won't eat deli meat or soft cheese out of fear of harming their baby may wince at the thought of introducing dead strains of the flu into their body voluntarily, particularly because they are accompanied by trace amounts of formaldehyde and thimerosal. (Vaccine mists contain live virus, but they are not recommended by the CDC this year.)

When making a decision about whether to get the vaccine, here are three things for expectant moms to consider.

A co-author of the new study told NPR that he knew the results would be controversial but that he believed it was important for the public to know both the good and bad.

"I believe the best approach with the public is to be very clear and open and transparent about 'Here's what we know; here are the limitations; here's why we still recommend the flu vaccine during pregnancy,'" said Dr. Edward Belongia, an epidemiologist and a member of the CDC's advisory committee on immunization practices.

The study only showed an association between the flu shot and miscarriage; it did not show that the vaccine caused the miscarriages. And although researchers looked at data from two flu seasons - 2010-2011 and 2011-2012 - miscarriages were only notable during the first season of study, and then only among women who had been vaccinated for two consecutive years.

That's one reason Dr. Paul Offit, a professor of pediatrics and director of the Vaccine Education Center at Children's Hospital of Philadelphia, argued in The Daily Beast that the study shouldn't have been published. Six previous studies had shown no association, making the latest study an outlier, Offit said, adding that the troublesome numbers were too small to be significant.

"After the CDC researchers had finished sub-stratifying their data, the numbers were small: 14 cases of spontaneous abortions in the vaccinated group and four in the unvaccinated group. The problem with small numbers is that they're often misleading," Offit wrote.

He said the study contained "weak, biologically inexplicable data" and that the publication of it could harm pregnant women and their babies if they elect not to get a flu shot because of it. About half of all pregnant women get a flu shot now and it's important because if they get the flu while they're pregnant, they're more likely to die from it than women who aren't pregnant, he said, and also to have a miscarriage, premature delivery or a low-birthweight baby.

Out of all age groups, infants who contract the flu are the most likely to die from it, Offit said, and since babies can't have the vaccine in the first few months of life, the only protection available to them is having a mother who has been immunized.

In his statement, Brown, the ACOG president, noted that one mystery in the new research is why the increased risk of miscarriage only occurred when the vaccine was given early in the first trimester and then only within 28 days after vaccination.

Although this might suggest that women who are worried about miscarriage should wait until the end of the first trimester or later to get a flu shot, ACOG does not suggest waiting.

Previous studies have found the vaccine "safe and effective" during pregnancy, the ACOG statement said, and "there is insufficient information to support changing the current recommendation which is to offer and encourage routine flu vaccinations during pregnancy regardless of the trimester of pregnancy." The group called for more studies to address the concern raised by this one.

Likewise, the study acknowledge that it "does not and cannot" show that flu shots caused the women to miscarry and concluded that "further research is warranted."

Pregnant women can ask for a special vaccine

Most obstetricians and federal health officials maintain that the flu vaccine is safe whenever research suggests otherwise. One of the most publicized scares came when vaccines were linked to rising rates of autism. The connection was eventually debunked and labeled a "myth" that contributed to a brief decline in vaccination rates.

The controversial connection surfaced again earlier this year when a study of about 197,000 women in California found a slightly increased risk of autism among children whose mothers had a flu shot during the first trimester of pregnancy.

The authors of that study, published in January 2017 in JAMA Pediatrics, concluded that if the flu vaccine had contributed to autism in the cases they analyzed, the numbers were so small (amounting to approximately 4 out of 1,000 women) that the finding could simply be attributed to chance.

As NPR noted in a report about the study, the researchers didn't consider whether the flu shots contained thimerosal, a mercury-based preservative that the FDA says shouldn't be given to infants.

Thimerosal, which has been a target of environmental activist Robert F. Kennedy Jr. and others in the anti-vaccination movement, has not been allowed in childhood vaccines since 2001, a change that some health officials say was unnecessary because there was no evidence that it was a problem, even in children.

(Adults don't have to worry about thimerosal, Wired magazine reported

While insisting that the vaccine containing thimerosal is safe for everyone, including pregnant women, the Department of Health and Human Services says that pregnant women who are still concerned about its presence can ask their doctors for a thimerosal-free dose.

Also, the CDC notes that you can ask your health-care provider to see exactly what's in any vaccine you (or your children) receive. "All vaccine packages come with information (called an insert) that lists the ingredients," the agency says on its website.

Beyond getting vaccinated, the Department of Health and Human Services recommends that pregnant women do one more thing to protect their baby from the flu: Ensure that everyone who will be around the newborn, from grandparents to siblings to the babysitter, has gotten a flu shot, too.

It's never been easier to get one. In some communities, such as Allentown, Pennsylvania, you can even get a drive-through flu shot without leaving your car. 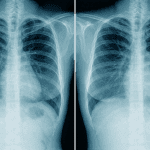 Man Told He Has a Lung Cancer Tumor,…