Children who have the ‘blues’ are nothing to sing about

Childhood depression is a serious topic that affects many young people. Often it is unrecognized. Here's a look at ways to recognize the problem and help your child navigate the rough waters of depression.

Two children are in the middle of their parents' divorce. The parents are both worried about the children becoming depressed. One of the children talks, asks questions, and cries regularly. The other child does not speak of the situation and goes on as normally as possible but is beginning to struggle with some school subjects. Which child should they worry about most?

The answer is both. Both children are exhibiting symptoms of depression and should be evaluated and monitored.

Who is at risk?

Depression is an illness that involves a depressive mood that lasts for a long time and interferes with a child or adolescent's ability to function. About 1 in 33 children has depression. Symptoms of depression may include:

The earlier depression symptoms are recognized and treatment begins, the more effective it will be. The American Academy of Child and Adolescent Psychiatry recommends a comprehensive treatment that includes family and individual therapy. This treatment may also include an antidepressant. Below are some common forms of therapy and their focus:

Antidepressant drugs are also a form of treatment. It can take 4-6 weeks before the full effect of medication is apparent. The biggest reason that people stop taking medication is because of the side effects, however, medication should only be stopped under a doctor's supervision. Let the doctor know of your concerns and discuss alternative treatments.

Help your child keep a regular diet because his body needs the energy to help him cope with the depression. Also, look at sleep and physical activity. A child with poor sleep patterns may increase the effects of the depression or may lengthen the duration of the illness. Physical activity can help fight the effects of, or relieve, the symptoms of depression. Parents should also listen carefully to their children. Try to understand what they are going through and help them find pleasurable and meaningful activities.

While it can be difficult to approach your child with questions about depression, it can be life altering and become very important to your child's overall well-being. 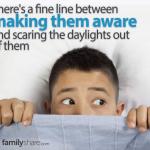