"The Addams Family" star reveals that she still co-sleeps with her son.

When speaking about her experience sleep training her son, she told People, "He screamed himself hoarse and started banging his head against the crib railing." She noted that when she welcomed her baby girl Cleo to the world, she was curious to see how she would take to sleeping in her own crib. "But with Cleo, when we decided to try it and see how she would react to it, she just sort of whined for about seven minutes and then laid down, clutched her little unicorn and went to sleep," she shared. "It was like she was ready and she wanted to do it, and it was right for her."

"The fact that I can put her down in her crib and she just goes to sleep when my 8-year-old still sleeps with me is amazing," she continued.

Ricci recently attended the 2022 Emmy Awards where she was nominated for Outstanding Supporting Actress in the Drama category for her role as Misty in the TV series "Yellowjackets," but lost to Julia Garner for her role in "Ozark." She noted that although she didn't bring home a trophy, she was still a winner in Freddie's eyes "because he saw me on live television." 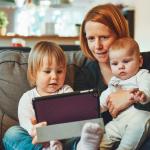