Discovering the Truth Behind Santa

When My Daughter Confronted Me About the Existence of Santa, I Realized My Answer Would Have Future Ramifications.

A few years ago, around Thanksgiving, my, then, 6-year-old daughter asked "Mom, is Santa Claus real?"

Panic set in. Were kindergartners supposed to question the reality of Santa? I hadn't prepared myself to have this life-changing talk with her so soon. That day, and several times later, I replied with vague answers then quickly changed the subject. Eventually she stopped asking, and I congratulated myself in helping her experience the Christmas magic for yet another year.

But that December she approached me, again. This time, she demanded I tell her the truth and accused me of changing the subject before. She wanted to know positively, one way or another, whether Santa was real. She had serious suspicions regarding who actually purchased the presents and ate Santa's plate of cookies and her parents were her prime suspects.

I realized I couldn't put the conversation off any longer, and called my husband into the room. We answered all her questions and fully disclosed the truth behind Santa. Yes, the presents were really provided by us, and we were the ones who ate the midnight snacks. At the close of our conversation, we were surprised by her reaction to our confessions. She was triumphant. She now had membership in the elusive Club of Santa Knowledge, something to which her younger siblings had not yet gained access.

Later, after telling this experience to some acquaintances, our actions were questioned. Weren't we ruining Christmas for our innocent daughter? Couldn't we have stretched the truth and told her Santa was real? Why hadn't we been vague and talked about the Spirit of Christmas?

Here's what I told them. Except without the bullet points.

Obviously, maturity should be taken into account. When dealing with young children, it can be inappropriate to delve into many subjects and details. However, just as we demand respect from our children, they deserve our respect, as well. When age is not an issue and they honestly inquire, we need to answer their questions as honestly as possible. Our frank conversation with our daughter helped solidify our continual promises that she could always count on us for the truth. While our daughter no longer believed in Santa, now she was the possessor of the more important knowledge that mom and dad don't lie.

It's important for children to approach parents first for information

Instead of overreacting to potentially uncomfortable questions, children need to know their parents are the best sources for information. Most parents hope their kids come to them, instead of others, about questions regarding sex, drugs and moral dilemmas. While questioning Santa's existence was a natural part of her growing up, I know as she matures into a teenager my daughter will continue to question more things about life. By laying the groundwork when they are young, our children are more likely to approach us, instead of others, about life's questions.

Christmas is about Christ, not Santa

Gently breaking Santa's reality to children by telling them about the spirit of Santa is seen by many as a great way to ease into the truthfulness of Christmas. However, by focusing on Santa, instead of Christ, we can actually end up hurting our children. Yes, mystery and magic behind Santa is fun. But, because kids are going to eventually find out the reality of Santa, it is important to teach the truth of Christ from the very beginning. We wouldn't ever want our children to wonder if our lies about Santa were connected to what we told them about Jesus Christ.

Age 6 is not always the perfect time to offer admittance into the Club of Santa Knowledge. Every child will become a member at a different age. Some people are positive we told our daughter the truth too young. Others think it is terrible she ever thought Santa was real. Obviously, everyone is entitled to their own opinion. However, children are never too young to learn they can count on their parents for honesty, to feel comfortable going to mom or dad with tough questions and to understand that Christ is the real meaning of Christmas.

Last year, my daughter asked if fairies were real. Remembering the previous Santa lesson, I bluntly told her that I did not think fairies were real at all. Despite our conversation, she adamantly continues her belief in all kinds of wee people. To each their own. 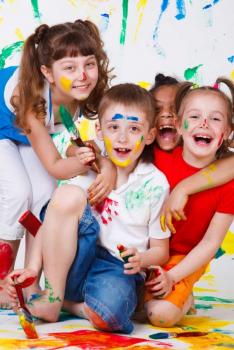 Have Some Silly Good Times With Your Kids