Many Parents Hesitate to Hire Male Babysitters. is This Gender Bias a Prejudice, or Simply Smart Parenting? Here Are Some Possible Benefits to Hiring Outside of the Box.

Having had six kids in ten years, my parents' sanity plan included lots of babysitters. Magical Marianne was innovative and playful. Timid Tara bribed us with licorice. Dictator Debbie practiced her violin at our house and limited us to one square of toilet paper.There were also some male sitters along the way, which made sense for our family of five boys and one girl. Magnificent Mark was a true marvel, astounding his young audience by popping firework snaps between his bare fingers. Not sure how my parents felt about the exploded remains on our kitchen floor, but we kids loved this new dimension of the babysitting universe.The good memories of male sitters carried over into my own parenting, and I've hired several to tend my children over the years. They weren't all masterful diaper changers, but they were often more playful with our kids and less likely to park them in front of a movie.Only through talking to other moms did I become aware that our choice to hire boy sitters was considered controversial, if not outright naïve - and it wasn't because males are less nurturing or less trained as caretakers. Online forums reveal an army of parents and professionals who draw a hard line against male sitters, suggesting that boys never be allowed to babysit. "The sex drive in teenage boys is too strong," says one detractor.Does this potential for abuse mean all teen males should be ruled out as babysitters? Society frowns upon profiling, be it racial, gender or anything else ... so how has this judgment against male babysitters become not only pervasive, but acceptable in our culture?While the incidence of babysitter molestation is higher for boys than girls, it's important to note that, according to the 2001 issue of the Juvenile Justice Bulletin, only 4.2% of reported crimes against children under six were committed by caretakers while 53.5% were by family members Strangers also surpassed sitters in crimes against young children. So while babysitting crimes can and do happen, sexual abuse comes from many sources. Children should be taught from a young age the types of behavior that are not to be tolerated from .Perpetuating the stereotype thatmales are potential sexual predators is unfair to the good and responsible boys out there. It also deprives young men of learning experiences that will help them in their own journey to become nurturing, involved fathers.We can keep our children safe without discounting an entire gender's trustworthiness by screening the sitter, not the gender. Being prudent and picky aboutperson who watches our kids is a better gauge for finding effective babysitters than hiring based solely on gender.Let's step back from the fear of male babysitters long enough to consider the benefits that can come from using them as caretakers, and the negatives that come from ruling them out.Here are five reasons to hire a teenage boy as your next sitter:

I now have a teenage son and feel somewhat defensive knowing that, in spite of how responsible and trustworthy he is, his gender is a natural strike against him in the world of babysitting. While the better-safe-than-sorry approach to male sitters may feel like judicious parenting, it also perpetuates the stereotype that males are not to be trusted. Breaking down this thought process will be beneficial to both your children and the boy you hire.

A popular ad shows a Mom, who despite her best attempts at playing planes and trains, can't quite interest baby in his food. Dad steps in with his awesome high turbo engine car sounds, and suddenly baby is all about eating. Boys can bring that same magic to babysitting. It may be most apparent when it comes to cars, legos, robots, tools and gadgets, but it doesn't mean boys can't get involved in the princess games too. And when they do, they'll likely put a unique spin on it.

We encourage and applaud involved fathers, so why should we make teenage boys feel they are not worthy of involvement with our children? SmartSitting, a caretaker agency in New York, reports that 87 percent of its sitters are female. The statistic jumps to 94 percent for Sittercity.com. No wonder males grow up to define childcare as women's work. Our cautious, fearful approach to boys as caretakers won't teach them to be the kind of men and fathers we want them to be.

As children, most boys are already deprived of baby dolls and Barbies. If we keep them from real children, too, how are they ever going to learn to change diapers, feed babies and kiss owies? We help teach the expectation that they can be an active part of child rearing by enrolling them in babysitting courses, getting them trained in CPR, and most importantly, by hiring them as sitters so they have the opportunity to put their skills into action.

Max Lucado said, "Feed your fears and your faith will starve. Feed your faith, and your fears will." I'm not so ideological that I don't know trust can backfire. There will always be exceptions in life that shake us to the core and break our trust in humanity. But while caution is sensible, is it healthy to live in fear of the possible instead of having faith in the probable?If we use vigilance in the process of choosing babysitters, hiring a respectable teenage boy who we know to be upstanding and honest does not automatically put our family in harm's way. Rather it can provide a great opportunity for both child and babysitter that will offer new insight, expanded perspective and most likely a pretty great time.For more help for boys, here are some tips on how to raise a gentleman.

Amy Maughan is a graduate of Brigham Young University and an MFA student at Vermont College of Fine Arts. She lives in Ponte Vedra Beach, FL with her husband, Brian, and five busy children.
nextarticle 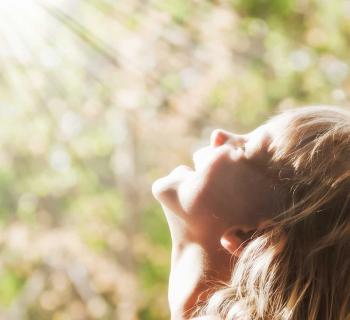 Life is Hard When You're Hard on Yourself