The idea of angels has continued to boggle even the most brilliant minds for centuries. What are they? Who are they? And why can we not agree on if they are real or not?

In the bible, there are countless tales of angels visiting the earth at significant moments. There was the angel who visited the Virgin Mary to inform her that she was carrying the Christ Child. There was the angel who visited the frightened shepherds on the night of Jesus' birth. And there are many instances when angels appeared to comfort, save or guide others throughout trying times.

But what do they look like exactly? We are all accustomed to many interpretations of angels: chubby, winged cherubs; tall, ever-glowing, winged humans; harps, robes, halos and so on.

First of all, do we know who angels are? Or what their purpose is?

The Bible simply describes them as divine messengers of God. They are frequently mentioned, and multiple times Jesus speaks about them administering to the earth.

We also know from Revelation that the Devil has his own angels who were cast from heaven along with him.

All in all, God sent angels to earth during particularly perilous times to comfort, guide and strengthen His children.

The answer is yes. Angels are not the chubby, winged cherubs we see in so many statues and other forms of art. Angels look very much human.

Some people who have encountered angels describe them as normal-looking human beings, only for them to vanish after a miracle or significant circumstance has occurred. In the scriptures, others have described angels as taking on a divine, startling and even frightening appearance. However, when the angels first appear, they often say phrases such as "Do not be afraid" and "Fear not."

Daniel gave a very detailed description of the angel whom visited him:

"Then I lifted up mine eyes, and looked, and behold a certain man clothed in linen, whose loins were girded with fine gold of Uphaz: His body also was like the beryl, and his face as the appearance of lightning, and his eyes as lamps of fire, and his arms and his feet like in colour to polished brass, and the voice of his words like the voice of a multitude" (Daniel 10:5-6).

Daniel also describes the angel as looking like a great and glorious man. In fact, the earthly men surrounding Daniel quickly cower and flee in fear of the powerful angel.

Therefore, angels may appear in different ways, but there is no doubt they look human.

Do angels have wings?

Nowhere in the Bible does it describe angels with wings.

One thing to consider when we question if angels have wings is this passage from Genesis 1:26-27: "And God said, Let us make man in our image, after our likeness [...] So God created man in his ownimage, in the image of God created he him; male and female created he them."

How can you see angels?

There are many instances of angels appearing to humanity, but what determines who they visit?

Today, angels still actively visit and administer to those who need them - just as often as they did when Jesus was on the earth. We only need to take a moment to feel their presence and recognize our feelings for what they are.

I think there are times when we would be surprised and elated to know just how many angels are watching over us each day. They come to our aid when we believe and ask God in faith.

If you'd like to see angels in your own life, try praying to God to help you. You can ask him to help you recognize the angels in your life and feel them around you. You might find angels are the everyday people you know and love. Through their acts of kindness and service, they'll carry a heavenly spirit about them. They'll uphold all the qualities and traits of a true servant and messenger of God.

By seeking angels out in your own life, you will find everlasting comfort and joy and you'll see angels surrounding you. 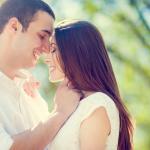 5 Truths About Marriage You Won't Learn at…