Do you really need to use deodorant? Find out right now

Recent Research Has Found That You Don't Need to Use Deodorant, Especially if Your Earwax Does Something Special.

If you're always applying deodorant, sorry, you're doing it wrong.

In fact, you may not even need it.

A 2006 study found that some people are born with a particular gene that could reveal whether their body produces odor when they sweat. The study, which examined whether people produced dry or wet earwax, found those who had drier ear wax didn't have a certain chemical in their armpits that has the bacteria that also creates body odor.

"Body odour of itself is odourless, however when it reacts with bacteria on the skin sweat is broken down revealing a chemical which produces a smell," The Independent reported.

But people remain generally unaware of this. As The Independent reported, a study from the University of Bristol found that 75 percent of women who didn't produce the odor still used body deodorant, mostly because of societal pressures to keep body odor at a distance, researchers said.

Devices like deodorant have been popular since, well, almost the beginning of time. The New York Times reported in 1990 that ancient Egyptians used "scented bathing" to keep themselves smelling fresh and would sometimes even apply perfume to their armpits to keep the odor away.

The art of antiperspirants has evolved so much that you can actually make your own, too, according to The Huffington Post. You can use plant oils and extracts, but those aren't always effective.

Of course, that lack of efficacy could be because people aren't applying deodorant the right way or at the right time of day. As The Verge's Chris Plante pointed out, people often apply their antiperspirant during the morning time, before your body has the time to clog your pores with the antiperspirant.

"You'll then still sweat throughout the rest of the day since the deodorant failed to 'clog those ducts,'" Plante wrote.

He suggests applying your deodorant at night instead, so that your body has the time to fill those ducts. 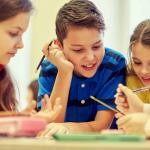 We're More Educated Now Than Ever Before, This…