A Survivor of Child Abuse Describes Enduring the Experience and Emerging Happy and Healthy. Sharing Information on the Effects of Child Abuse, What to Do if You Suspect Child Abuse, and International Resources.

"Many people, even children, accept violence as an inevitable part of life. Often, children who have suffered violence or those who are aware of such violence keep quiet because there are no safe or trusted ways to report the violence or get help."

As a survivor of child abuse, I understand the fear and shame victims of child abuse struggle with daily. When I was 8 years old, my mother realized something was wrong. I was fortunate to have her stand up in my defense. She packed us up in the van and with just the clothes on our back, drove away. Because she stood up in our defense, I was able to heal and obtain the help I needed to start the process of overcoming years of abuse.

When a child is abused, in any form, it changes them. Growing up, I had feelings of inadequacy and worthlessness. I had determined in my young mind that the abuse was, in fact, my fault. I believed my perpetrator when I was told I was wrong. My abuser told me my mother would hate me if she found out. Many children adopt these same feelings when they are abused; hiding their shame and suffering guilt. My experiences have also given me great hope for children who are heard, believed and protected allowing them to begin the healing process. These same children, if not helped early, can develop many social and emotional issues. Child abuse victims may have problems with:

This is a worldwide problem. The UNSG Study estimated worldwide

Children do not need to suffer in this way

They should not have to live in fear. We can stop child abuse and violence. There are many ways to do this:

There are many hotlines and websites for child abuse worldwide

To the victims and parents of child abuse, know there is hope. Abuse can be overcome. It is not your fault, and you don't have to feel ashamed or guilty. You can get help. It may take a lifetime of work, but it's well worth your life to give it all you have.

I was able to begin my life journey to heal because I have a mother and family that listened to me, believed me and provided me with safety and professional support. Not all victims of abuse are as fortunate, but they can still begin the healing process with determination, prayer, and love. Seek out local organizations that help victims of abuse.

Later in life, as a young adult, I met an amazing man with whom I wanted to spend my life. I thought I had put my abuse behind me. I had undergone years of therapy and work. I was doing great, but I soon realized I still had some work to do. I was filled with feelings of guilt, shame and anger all over again. I needed to learn to forgive my perpetrator. Many years later, with some hard work and much prayer, I feel I have been able to let go and find peace and forgiveness. I will always remember what happened; it has shaped me, but I will not let it anchor me to the past without hope of developing a bright future. 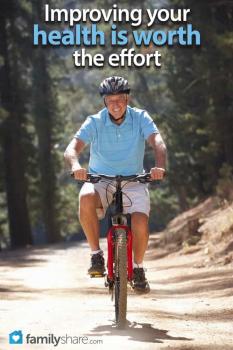 Being Fit: is It Worth the Sweat?