This New Song Helped Him Heal.

It's seems crazy to think that the Las Vegas shooting was only a couple of months ago. This tragic event changed many lives for the worst. Right after the Vegas shooting, I wrote an article about Sonny and Heather, who were victims on that terrible night. Sonny protected his wife Heather from the bullets by acting as a human shield. He died so she could live.

I have thought a lot about this story and the heroes that came out of the tragedy. I have hoped that I could be as brave as Sonny was to be able to protect those that I love.

But Sonny and Heather's story didn't just affect me

Sonny's bravery and Heather's pain affected someone else at the concert: the singer.

Eric Church said the story of Heather and Sonny broke him. Church was performing that terrible night. He interacted with the crowd and saw their faces - their excitement - as they sang along to his songs.

He did something unexpected at that concert. During one of his songs, he jumped down in the crowd, walked through the people and sang to them face-to-face. He shook as many hands as he could.

Although he was on tour, he didn't want to perform after the shooting. Not because he was afraid or felt survivor's guilt, but simply because his heart was broken. He had walked through that crowd of his fans who now were in the hospital or had been killed. Hearing their tragic stories, especially Sonny and Heather's, simply broke his heart.

Church goes on to share the reason he continued his tour

"The reason I'm here tonight is because of Heather Melton and her husband Sonny, who died, and every person that was there," he said.

Heather and Sonny had tickets to the next spot on his tour. They were avid fans who loved Church and his music. Though their sets were left empty, he sang to Heather and Sonny. He sang to his fans who had suffered a great loss.

"The only way I've ever fixed anything that's been broken in me is with music," he said. "So I wrote a song."

"His words were raw, and rang true of the things country music was founded on-God, heartbreak and vulnerability," one reporter shared. His new song shares words of great feeling and comfort.

Nothing can give us back the people who were lost in the shooting, and with more shootings happening across the country, more families are losing precious people. We can only join together to support their families.

We may not be able to write songs that bring peace to people's souls, but there is something each of us can do to support and love people affected by terrible shootings.

Find ways to volunteer in our communities and reach out to those dealing with loss. Just because these people aren't in the headlines anymore doesn't mean they aren't still dealing with feelings of loneliness, anger and grief.

Don't forget to reach out and lift those in need. 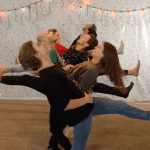 Every Year This Family Choreographs a Dance so…