Do You Agree With This Parenting Tip?

Kristen Bell has touched our hearts with the wide variety of roles she has played, from Veronica Mars to Anna from Frozen. She also plays the role of a mother for her two daughters: Lincoln, 4, and Delta, 2.

"I am a parent that actually loves to hear advice from other mothers," she said. "I don't care if your filter is judgmental or altruistic - I still want to hear it because it may be valuable to me."

Quick fix for a broken pull up when you're on an airplane? Hair tie. BOOM. Next question. #mom

What style works best for her?

Bell said she looks all over for different types of parenting methods and styles before deciding what fits best for her family.

Whatever you do in life- do it like a mother. Snag this exclusive tee from the link in my bio or at Omaze.com/mother @allianceofmoms

Bell said she allows her girls to feel validated in their feelings, because saying 'it's OK' makes them think that they're not supposed to be having those feelings.

"We tell them to have feelings," Bell said. "Even if it's a tantrum and they're screaming and crying. I say, 'You know what? You are allowed to be sad right now. You are allowed to be angry. But, you cannot be angry and sad in the middle of the living room while we're having dinner. You're welcome to go up to your bedroom and cry, but you're not allowed to ruin everybody else's evening because you're having a tantrum."

Bell said while she lets her girls show their feelings, she knows how to keep them within reason and with respect to the world around them

Even worse than saying "it's OK" is saying, "you're OK." When your children try speaking to you about how they're feeling, but you brush it off by telling them they're OK, it not only tells them they're wrong for feeling a certain way, but it makes them feel like they can't talk openly with you.

"I do shatter a little bit when I think people don't like me," Bell said. "That is why my husband is such a good match for me because his mantra is: It doesn't matter if anyone else likes you, what matters is if you like you."

Bell says her husband-actor Dax Shepard-often repeats his "mantra" to their daughters, which she has found to be incredibly helpful.

This was nearly 10 years ago. I often wonder if I chose correctly. The dolphin's not on Facebook, so it's hard to know for sure.

We can all learn something from Kristen and Dax's parenting style. Help your children feel more comfortable and confident in themselves by listening to them and encouraging them to effectively communicate their feelings. Doing so will strengthen your relationship with them now and in the future. 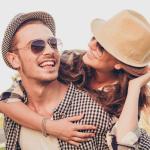 7 Specific and Simple Solutions to Your Marriage…