If you want to live happily ever after, it is a good idea to develop some smart money habits - the earlier the better.

Recently, University of Cambridge researchers released a study for the UK's Money Advice Service, demonstrating how money habits are formed among children even before they reach 7 years old. This may or may not prove to be true, but to be on the safe side you might as well begin teaching your children great money habits now.

I am not recommending that you make Warren Buffet's biography into a bedtime story. Instead, there are already some classic children's stories that will provide them with a foundation of wise money habits.

The Ant and the Grasshopper

This story, attributed to the ancient Greek storyteller Aesop, who lived 2,500 years ago, has some great financial advice. The grasshopper in the story spends all his time playing while the ant spends his time working hard and setting aside food for later use. When winter comes, the ant has food, but the grasshopper does not. The obvious message here is to save for the future.

The Tortoise and the Hare

This is another Aesop fable. The hare's overconfidence and mistaken belief that he can always catch up later is a good example of how not to invest. Meanwhile, the tortoise's approach of being slow and steady is the perfect way to invest. Financial guru Dave Ramsey tells the story about how he likes to interview millionaires to find out the secret to their success. One multimillionaire told him that the secret to his success was regularly reading "The Tortoise and the Hare" throughout his life.

While the first two pigs settle for making homes of straw or sticks, the third pig builds a home of bricks that is strong enough to keep out the big bad wolf. The message here is not to settle for a result that will not hold up but plan on something strong that will hold up.

This classic folk tale tells the story of a hen who takes the initiative to grow wheat, harvest it, take it to the mill to grind to flour and then bake it into bread. During the process, she invites other animals to help, but they all decline. Yet when the bread is finally ready, the lazy animals all want to eat it. The obvious message here is that we should work to produce what we want to consume and not expect others to do it for us.

The Goose that Laid the Golden Eggs

Here is another fable that is attributed to Aesop. The farmer in the story had a good thing going with a goose that laid an egg of solid gold every day. However, when he got greedy and decided he wanted more, he killed the goose to find what was inside - only to discover nothing. Here is another story where the message is, you are better off sticking with an investment that works instead of making a risky move where you lose it all.

The Milk-Woman and Her Pail

Once again, Aesop proves to be a deft financial advisor. In this story, a farmer's daughter is bringing in a pail of milk and daydreams about what she will do with the milk. She will trade it for eggs then raise chickens, and then sell them to buy a nice dress to show off to the young men. She spills her milk, ruining all her plans. In our day of easy credit, how many people buy a bunch of stuff only to find out later they can't afford it, but are stuck with the debt? Children who internalize a story like this might be less inclined to borrow recklessly when they grow up.

You know your child enjoys lap time with mom or dad reading books. Here is your chance to build a foundation of smart money habits through stories. If the result is a child that grows up making wise choices with money, then it really can be a "live happily ever after" story. 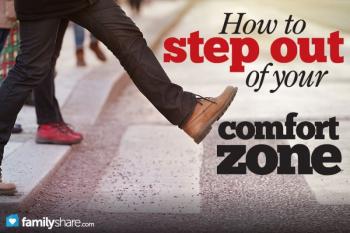 How to Step Out of Your Comfort Zone