For your kids’ safety, keep these 5 types of photos of them off the internet

The world has come a long way from baby books and professional photos at Macy's. Now is the age of blogs, Chatbooks and Facebook pages for infants. The cameras on our phones are nicer than most single-function cameras, and millions of pictures are uploaded to the internet every hour. The effect of this photo revolution is a day-by-day documentation of every single event in the lives of children today. Most of the time these pictures are for relatives and close friends to keep up with your busy life, but not all pictures should find their way online. Here are five examples of pictures you can still take, but that should be kept with a little more care.

2. Photos that outline your daily routine

A photo at the park of your morning jog, followed by a picture in front of your child's school can be put together with a daycare shot to create a schedule of sorts. It doesn't happen often, but these photos can be used to make plans to harm you or your children. Child kidnappings by a stranger make up only a small fraction of kidnappings; but it is better to be cautious than sorry. Aside from kidnappings, burglars may also use social media posts to know when to target a certain home or person. Fifty-four percentof burglars said posting their whereabouts on social media was the most common mistake made by homeowners.

You may think they are hilarious and adorable, but embarrassing photos can come back to haunt your children later in life. With advancing technology, a simple Google search can turn up way more than anyone wants to know. Future employers, for example, look for information on prospective employees. And even if they were understanding, the world of public shame and humiliation is not. You never know how your kids will react when they are older. Some may not appreciate the everlasting life given to their most embarrassing moments.

4. Photos of other people's kids

This is just a common courtesy. You may love it when you see your kid pop up randomly on a friend's Facebook page, but for others it could seem like an invasion of privacy. A good rule to follow is to ask before you post. If you are at a birthday party and snap a great picture of your son and his friend playing, ask the other parents if they mind before posting the pic to social media sites. It's easy, and you may avoid some negative emotions that could easily develop from a simple misunderstanding like this.

5. Photos that identify where you live

A lot of photos these days are automatically geotagged (identified and tagged geographically), and if you aren't looking for it, you may never realize that the picture you just uploaded to Facebook actually contains your address or the address of your child's school. Similarly, pictures with an identifying symbol or street name in the background can also be used to identify location. Seventy-eight percent of criminals have admitted to using Facebook, Twitter, Foursquare and Google Street View to choose their victims. Again, just be aware and set your privacy and photo settings accordingly.

We all need to be aware that the internet is public and the photos we publish can be used for things outside of our control. Don't let worry overburden you, or become the crazy parent that never lets her child leave the house, but do be cautious. Think for one second longer before you post to social media and make sure you don't post anything you may regret later. As always, be smart when it comes to your children and technology, and take care. 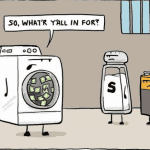