1. Clinic Claims to Successfully Make Babies With 3 Parents' Dna a Clinic in Ukraine is Doing Something No One Else in the World Is: Using Dna From Three Different People to Create Babies For Infertile Women. The Process Uses the Infertile Woman's Egg, the Sperm of Her Partner and the Egg of a Donor....

A clinic in Ukraine is doing something no one else in the world is: using DNA from three different people to create babies for infertile women. The process uses the infertile woman's egg, the sperm of her partner and the egg of a donor. Here's what happens:

"¢ Both eggs are fertilized by the partner's sperm

"¢ Once fertilized, DNA from the woman's egg is extracted and placed in the case of the donated egg

Here's a video of the process. (Victorious music included.)

Clinicians say this method is good because it allows infertile couples to have a biological child. However, many genetics researchers and ethicists are skeptical due to the possible health concerns and the potential for "designer babies." So, TBA what the future holds for three parent babies.

Something to chew on when your daughter shows you her rolled tongue...

Let's have fun with genetics. Try these activities:

"¢ Extract DNA from strawberries (even little kids can do it!).

"¢ Follow inherited traits through your family tree to find out where they came from.

A new study shows that although humans make up only .01 percent of all life on earth, through the world's history, we're responsible for destroying 83 percent of wild mammals and half of plants.

"¢ Farmed poultry makes up 70 percent of all birds, while only 30 percent are wild.

What's more, in the past 50 years, scientists believe half of the earth's animals have been lost. Some scientists consider this the sixth mass extinction in earth's history.

Something to chew when you're menu planning this week...

Ron Milo, a professor who led the study at Weizmann Institute of Science in Israel, said, "I would hope people would take this [work] as part of their world view of how they consume. I have not become vegetarian, but I do take the environmental impact into my decision making, so it helps me think, do I want to choose beef or poultry or use tofu instead?"

If you want to not eat quite as much meat as well, check out some of our favorite meatless recipes:

"¢ Homemade Veggie Pizza from All Recipes

"¢ Anything from Food Heaven Made Easy

Make sure to take advantage of the time you have. #Children #Kids #Family #Growth #Famifi

This trailer has been number one on YouTube, and if your kids care about Avengers at all, they've probably seen it. (And if not, you can be the "cool mom" and show them.) Head's up: it has violence, monsters and all that jazz. 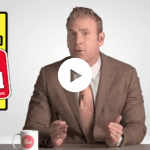