When it comes to playing games with the kids, what parent wouldn't love throwing in a little bit of education along with all the fun? Here is a list of the top ten educational games children love to play and parents don't mind playing along.

When it comes to playing games with the kids, what parent wouldn't love throwing in a little bit of education along with all the fun? As a home-schooling mother of five, I have had a lot of experience in playing games for the sake of education. Here are the top ten educational games my children love to play and that I don't mind playing along with them.

My kids love this crazy game of comparisons. It's fun for them because they laugh as they compare nouns in their hands to the word (adjective) in the middle. One of them gets to judge the best comparison. It's fun for me because I get to see their creativity with the comparisons. It involves thinking skills, and I get to see good communication skills as each pleads his case to the judge. It's a great educational game that teaches vocabulary, creativity, thinking skills and communication.

This game is similar to Scrabble, but there is no board required. Everyone gets a number of tiles and the first person to use all of his tiles creating words wins. Players lay out the words in crossword puzzle form. The kids love it because it's fast and easy. I love it because they are learning how to spell and create words using the letters they are given which requires critical thinking.

These are different games but they essentially do the same thing. The Story Cubes are dice with pictures on them. In Tell Tale there are cards with pictures on them. In both games, you have to use the pictures to make up your own story. This is by far my kids' favorite game - and mine too. I love listening to the stories the kids come up with and I love making up stories myself. This game uses imagination and creative thinking. It also helps with communication skills.

Who wouldn't want to learn fractions by making a pizza! My kids love it for the fun factor and I love it because they are learning fractions.

5. Money Bags or The Allowance Game

These are also different games but they both teach the concept of money very well. In both games, you travel around the board earning money. The person with the most money at the end wins. The kids love it because they are earning money, even if it is fake. I love it because they are learning how to make change, add and subtract both change and bills.

This is a strategy card game for kids and won the Mansa award. Not only does it teach children strategy, but it teaches memory and math as well. Each player gets four cards that are turned upside down in front of them. They only get to peak at two cards. The object is to have the lowest score, so they have to trade cards, keeping the cats (the good guys) and getting rid of the rats (the bad guys). The kids love the fun pictures and the sneakiness of the game, while I love the fact that they are doing math in their head without even knowing it.

This card game can even be played in the car. Two cards are displayed at once and the object is to scan the pictures on each card and call out which picture is the same on both. This game teaches patterns, critical thinking, spatial reasoning and increases memory. The kids love it because they get to yell things out. I love it because they are learning as they go.

Also endorsed by Mensa, this game involves matching either colors or shapes and includes strategizing to win. It can be played by younger children for the simplicity of it, but older children can also enjoy it because of the strategy side of it.

This is a great game for children 8 years or older. There are actually questions for 8 to 10-year-olds on one side and 11 to 12-year-olds on the other. The questions are fun and educational, making it a win-win game for both parents and kids.

I know this may seem like a strange one to throw in, but I have used this game more in my children's education than any other game out there. I used it when they were toddlers to teach them color and number recognition. I used it when they were in kindergarten and first grade to teach them addition and subtraction. Whenever they placed a card down, they had to add or subtract it to the number that was underneath it. I used it to quiz them on their multiplication tables. I would take out just the numbers and divide them between my child and myself. Then, we would each lay a card down (for example 3 and 7) and whoever could yell out the right multiplication answer (21) they would get the set of cards. Whoever had the most cards at the end won the game.

One of the greatest things about learning is that it can be done anytime, anywhere, with anything. Take the time to have fun with your kids. Buy one of these games today and play it with your kids. Not only will you have a fun time together, but your kids just might learn something too. 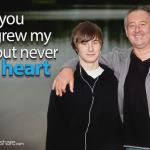 How to Talk to Your Teenage Son