Get on the Same Financial Page as Your Spouse

Do You and Your Spouse Struggle With Being on the Same Page Financially? Here Are Some Ways You Can Fix the Problem.

Finances are one of those things most couples prefer not to talk about. Many finance conversations between husband and wife end in an argument. But if you haven't gotten on the same financial page with your spouse, now is the time. It's easier trying to ignore it and hope your spouse will change without any collaboration or compromise, but it's unlikely that will ever happen.

Statistics show that the majority of divorces are a result of financial problems. But along with all the other reasons for divorce, it's not the financial situation or even disagreements about finance. It's selfishness. There are a lot of different scenarios we could talk about. Here are just a few:

It's sad to think of the prevalence of each of these scenarios. In each of these, one or both spouses are blind to the background, habits and needs of the other. It's even sadder when one spouse is willing to work at it while the other remains selfish and blind. So here are just a few ideas about how you can get on the same page as your spouse:

- The main reason I put this as #1 is that in order to budget together, you need to communicatewith each other. This is the best time to talk about these things because it's not in the moment when emotions are high. It's still possible that there will be arguments, but it's better for it to happen in a neutral situation than in the heat of the moment when more damage can be done. Budgeting together also shows a willingness to work together, so it's important to have that mindset going in. You can't have your way on everything, but be honest about how you feel. Don't just talk about what you want, but why you want it. Your spouse can't read your mind. But understanding the "why" is a very important step in compromise. Another reason why budgeting can be good is when one of you wants to make a purchase that isn't in the budget, it's not the other spouse who is saying no. Rather it is the budget that the both of you set up that is stopping you. This makes it a little harder to blame your spouse.

- Your spouse's spending and savings habits are largely a result of their experiences and perceptions growing up. That being said, those habits are going to die hard. It takes a lot of understanding and compromise to come to an agreeable situation. For example, I hate spending money on clothes. My wife, on the other hand, loves new clothes. When we first got married, I had a lot of problems with it. But after a lot of discussions and even some unresolved anger and hurt, I finally realized that she was actually quite responsible about it, and as we averaged out how much she spent on a monthly basis, it really wasn't that much. So it wasn't a problem of her spending. In fact, her spending wasn't a problem at all. It was just the difference between our perceptions. When we learned to compromise, we communicated better, and it was no longer a problem.

- If you are relatively new to putting a financial plan together, working with a financial advisor can help you set goals and work together to establish good behaviors. Depending on how dire your disagreements are, you may need to work with a marriage counselor. A counselor can help by facilitating a healthy discussion and can act as a sounding board so that both sides can be understood. Remember that the problem isn't finances, but selfishness. A counselor can help you see and solve the root of the problem rather than trying to focus on the branches. 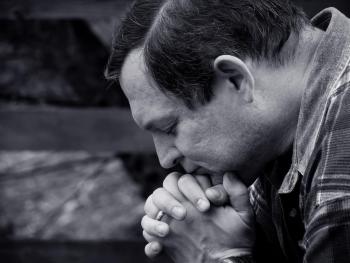 How to Use Prayer to Get Through Tough…