When it comes to your expectations for your children's behavior, don't always assume the children know what those expectations are unless you clearly state them.

Take, for example, a time when I learned that I could have been a little more specific about what I expected my child to do. I was busy with one of motherhood's many forgettable tasks when one of my young sons came in complaining that his older brother had hit him. Frustrated as always with the constant tattling, I said, "Go hit him back."

What I heard myself saying in my mind was, "I'm tired of tattling, so work it out yourself. I'm sure you'll think of a peaceful way to do it and will go on to play nicely while leaving me alone."

That wasn't quite what my son heard. He took me literally, went and found a hammer, and hit his brother on the head with it. When the bleeding child came in crying, his younger brother said to me, "You told me to hit him." Yes, but ... .

As parents, we might know what we mean when, arriving at the grocery store, we tell our children, "Be good. Behave. Be nice." It is better, however, to make our expectations clear: "Do not touch anything. Walk beside me and hold onto the grocery cart ... right here. Don't run down the aisle and don't push your brother. (Or hit him over the head with a hammer.)" With the expectations clearly in place, the children know exactly what behavior is expected of them and stand excuseless if they choose not to obey!

Younger children might require a review-or several-before the behavior is adopted. Before a trip to the library where my little granddaughter has pushed other children who want to play with the same train or are even close to the books she wants to see, my daughter reviews her expectations with her daughter.

"What don't we do in the library?" my daughter asks. Usually, my granddaughter responds, "We don't push our friends. We don't hit our friends."

When I was with them once, I saw a potential problem when a little boy about her age took over the train table. I saw my granddaughter struggle between the expectations she knew were in place and her natural tendency to get the offending "friend" out of the way. "What don't we do?" I whispered.

"Push our friends," she answered. And that time she was able to make her behavior match the understood expectation. In her mind it was much easier to understand "don't push other children" rather than "be good."

At jobs, in school, at home, and out in the public, fulfilling expectations is much easier if those expectations are stated clearly at the correct age level and repeated as needed, and if the proper consequences are delivered when the expectations are not met. Plus, no one gets hit with a hammer. 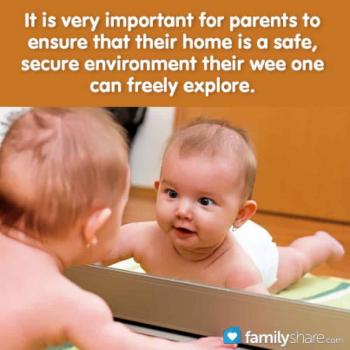 How to Baby Proof Your Home For Safety…