Harry Potter Versus the Pc Police: Can Dark Tales Help Your Children?

A Famous Psychologist Posited That Children Benefit From Dark Tales, Giving Them a Greater Sense of Meaning and Purpose. Original Fairy Tales Are Making a Comeback. is Harry Potter Really That Bad For Children? Do Such Fairy Tales Really Help Children?

Ask most parents, and they will tell you they probably know more about Harry Potterthan they would like to admit. Harry's adventures are compelling and the entire Harry Potter narrative is rife with symbolism. At the core, Harry Potter is a modern day fairy tale brought to life with Hollywood special effects and technology never before available.

In the Harry Potter series, young Harry is famous among his peers by virtue of his legendary, but deceased, parents. He must choose between good and evil and, in the process, find his own way. His adventures are emotionally and physically risky. Failure and death constantly threaten, but Harry, like a hero, struggles to prevail. His adversaries are considerable. Harry delivers.

The good, the bad and the politically correct

Fairy tales, including traditional tales like Rumpelstiltskin, Snow White, Sleeping Beauty, Rapunzel, Cinderella, Hansel and Gretel and many others, at one time or another have been considered too dark for parents to tell their children in their original form. Many fairy tales have been modified to reflect a more sanitized and politically correct version of an original fairy tale.

Author Terri Windling has said, "Disney's well-known film version released in 1937, was based on the German tale by the Brothers Grimm. 'Snow White' is a darker, chillier story than the musical Disney cartoon, yet it too had been cleaned up for publication, edited to emphasize the good Protestant values."

The collected works published by the Brothers Grimm and others are making a comeback in their original forms. In National Geographic, 12 of these unvarnished tales are retold based on earlier versions first published in 1914 and are much darker than those we tell our children today. Which leads us to ask, is this a good thing?

Over the years, many authors and experts have weighed in with their own perspectives.

J.K. Rowling, author of the Harry Potter stories, has said, "I ... feel that we're not giving children enough credit for distinguishing what's right and what's wrong."

Child Psychologist BrunoBettelheim theorized in his critically acclaimed work, The Uses of Enchantment, that the darkness of abandonment, death, witches, and injuries, (all found in the Harry Potter tales, as well as many others) allow children to grapple with their fears in remote and symbolic terms.

The book won the U.S. Critic's Choice Prize for criticism in 1976 and the National Book Award in the category of Contemporary Thought in 1977. It is still widely available on Amazon.

He says by engaging children with socially-evolved stories, children go through emotional growth that will better prepare them for their own futures. He advocates allowing children to read and interpret fairy tales in their own way, gaining a greater sense of meaning and purpose.

"Children need to be given the chance to understand themselves in a complex world and learn to cope...they need to be helped to make some coherent sense out of the turmoil of their feelings," Bettelheim writes.

Many young people recognize elements that make fairy tales so appealing almost effortlessly even if they are toddlers. Grammy award-winning country musician Taylor Swift has said, "When I was a little girl I used to read fairy tales. In fairy tales the bad guy is very easy to spot. The bad guy is always wearing a black cape so you always know who he is."

Bettelhiem writes, "For a story to truly hold the child's attention, it must entertain him and arouse his curiosity. But to enrich his life, it must stimulate his imagination; help him to develop his intellect and to clarify his emotions; be attuned to his anxieties and aspirations; give full recognition to his difficulties, while at the same time suggesting solutions to the problems which perturb him. It must ... give full credence to the seriousness of the child's predicaments, while promoting confidence in him and the future."

Few parents have the talent of J.K. Rowling or the psychological expertise of Bettelheim, but many would do well to study the lessons found in both the un-sanitized and politically incorrect fairy tales of the past and the modern fairy tale of Harry Potter. The result might be a surprising, albeit unquantifiable, benefit to their children as they grow. 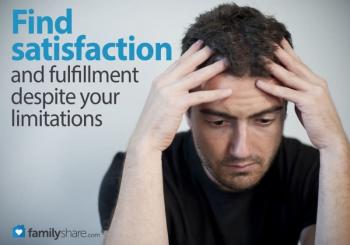 When Getting Out of Bed is Asking Too…