Are Your Concerns Reasonable or Petty?

Is your parental instinct on high alert? It’s completely natural to feel territorial or uneasy if your son brings home a girlfriend that you aren’t happy with. Usually, young ladies feel an urge to prove their worth, and their actions can sometimes feel aggressively intruding. In most cases, it’s not intentional.

Remain calm. Before you vocalize your disapproval, check-in with yourself, and determine if the issue is a ‘you’ problem or a ‘them’ problem. If it’s a ‘you’ problem, then odds are you won’t like 8 out of 10 girlfriends your son dates – which indicates that you should do some reflective work for yourself. However, if you determine it’s a ‘them’ problem, you’ll need to identify legitimate reasons why your son’s girlfriend is potentially dangerous and/or unstable.

1. Are you judging your son’s new girlfriend based solely on appearances?

Maybe you’re not keen on tattoos, a certain style of clothing, cursing, or a genre of music.

3. Is your dislike based on one or two brief conversations?

4. Are you judging your son’s girlfriend on “he said she said” gossip that you heard from a third party?

5. Are you placing your son’s insecurities on his girlfriend?

Sometimes we expect people to fill in the gaps for the insecurities we possess.

If most of your responses were yes, then it sounds like you have a ‘you’ problem. You’ll need to look within and do some work. As the parent, it’s important to take the time to give your son’s girlfriend a fair chance. If you decide to write her off, your son will feel isolated and resent you for your unfairness.

Instead of jumping to conclusions, have a growth mind, and make an effort to better know your son’s girlfriend. Even though your son may not initially see your efforts, he will eventually see the bigger picture and how you are trying to be accepting of his girlfriend.

Once you’ve resolved your personal issues, here is what you can do to give the girlfriend a legit chance.

Don’t rely on your son to extend the invitation, take action yourself, and talk to your son’s girlfriend. Invite her to dinner, a family outing, or a game night. Be intentional and ask her if she has any likes, dislikes, and/or allergies – and cater to those. Your son will appreciate the extra effort on your end, and his girlfriend will feel more included and less isolated.

If your son and his girlfriend feel welcomed in your home and presence, they are more likely to hang out and talk to you if they have concerns in the future. The last thing you want to do is drive a wedge between you and your son. It’s important that everyone stay connected and feel at ease.

Get to know your son’s girlfriend.

You don’t have to make the situation any more awkward than it already is. Let the conversation be organic and free-flowing. Ask her meaningful questions: Where does she live?, What sports or hobbies is she into?, Does she like a certain subject in school?, Where are her favorite travel destinations?, or What TV show is she enjoying?

Remember that your son’s girlfriend is a human being, and being relatable (with her) will lessen the awkwardness you’re feeling. Odds are she will appreciate your intentionality and feel comfortable to be herself.

If you experienced a disagreement in the past with her, consider making that issue water under the bridge. However, if you’re unable to do that, then consider addressing the issue once you’ve got to know her better and have developed a better relationship. While it’s not healthy to wallow in the past, it is important to always be honest.

Talk to your son.

Have open, honest conversations with your son – and not only about the things you dislike about his girlfriend. Be positive and communicate with your son. It’s crucial for every relationship to have open lines of communication and speak up. If you can talk to your son when things are going well, then he will feel less sidelined if you voice your concerns about things you don’t like.

Be honest and ask yourself, “Do you genuinely feel like your son’s wellbeing is at stake?” If the answer is no, then you need to accept his relationship decision and look for ways to move on. If they’re not compatible, it won’t last anyway. If you do believe his wellbeing is in jeopardy, express your concerns in a neutral environment with a respectful tone. Then, listen to his side of the story with an open mind. While you probably won’t come to an agreement after one conversation, maintaining a calm attitude, and having respectful dialogue will allow the conversation to continue.

When your son begins dating, it’s never easy to let go and allow him to figure out the ins and outs of a relationship. However, there are some small ways you can choose to give grace to your son’s girlfriend and make the dating process less hard.

• Respect differences. You do not have to share the same habits, priorities, and/or opinions of your son’s girlfriend. Embrace diversity and her unique perspective.

• Ignore her faults. Everyone has flaws! Don’t be petty, be patient, and less critical.

• Don’t get hung up on a first impression. Yes, first impressions are important; however, some people aren’t the best at portraying them. We all have off days and foot in mouth syndrome occasionally.

Parenting isn’t easy! Your son must grow up and be free to make his own choices. Instead of deliberating how to get rid of the girlfriend, you don’t like, try to focus on how you can make the best out of the situation. 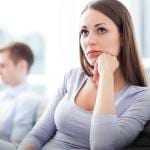 6 Types of Women Who Cheat