Help! My Child Was Replaced by a Grumpy Teen Alien

Once Upon a Time My Child Was a Sweet, Accommodating Young Tot; Now He's a Grumpy Bear. We Parents Can Help Our Kids Through Their Tumultuous Teen Years by Offering Our Time, Showing Sincere Interest in Their Lives and Cheering From the Sidelines.

I once had a bright-eyed, cheerful, loving young tot who simply adored me. He was my precious little child. One day, I woke to the sad realization that my little sweetie was still cute, but in a gangly, uncommunicative, unresponsive teenage sort of way. Not quite the same.

As parents, we love our children at every stage of life. But maintaining an open, loving relationship can take more work once kids reach puberty. And sometimes they want you, sometimes they don't.

My dad recounts a story from his youth. As a 13-year-old boy, he was passionate about horses. One day his father was preparing to leave their house to look at some horses. My dad overheard his plans and eagerly asked to come along. To his dismay, his father replied, "Why would you want to go?" It was clear to my dad that he wasn't wanted. This experience made him hesitate to ask in the future.

Mark Robins is a father of five and long-time scoutmaster. He says, "[It is] vitally important to spend time with my teens doing the things they want to do " Teens love to showcase new ideas or areas of development, especially if it proves that they can do it better than their old man. I think that showing some vulnerability and willingness of a new adventure can open the lines of communication between parents and teens."

Robins also points out the importance of allowing kids to follow their own paths. It's the parents' role to encourage from the sidelines. "One of the toughest issues (for teens) is establishing their identity. 'Who am I? Am I a cool kid or the class clown?' For kids, the ages of 12-15 are a real discovery time. It's interesting to look at it from a leader's perspective to see how they evolve in the discovery of who they'll be," says Robins.

Parents need to allow their kids to grow and gain independence, but in a structured environment. I know a woman who is a single mom to three teenage kids. The teens' friends consider her to be the coolest mom around because she allows her kids lots of freedom and encourages them to have a good time. This mom is a caring person, warm and fun to be around. But recently I've noticed that her kids seem to get away with behavior that most other parents would never tolerate.

I realize that I'm not this woman's judge, and I know that single parents lead tremendously busy, stressful lives. But I can't help but wonder if those teens need and even yearn for more structure, limitations and consequences.

Despite their growing independence, it can be hard not to hold our teens' hands as they make their way through life. A friend once said that it's not that they don't love you, it's just that you have to let go a bit.

As parents we can offer our time, show sincere interest in our teens' lives, establish boundaries and encourage them in the paths they choose. There may be fewer sweet, snuggle moments, but the glimpses we catch of our amazing children on their paths to adulthood are just as rewarding. 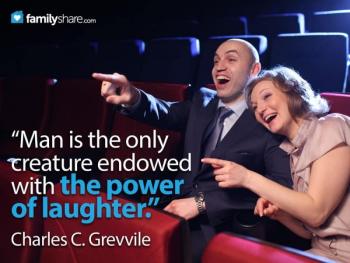 Laughter is the Best Medicine: Laugh Your Way…