My Kids Promised to Help if I Bought Them a Puppy. They Kept Their Word, For the Most Part, But There Was One Job I Couldn't Get Anyone to Do.

"Mom, please, can we get him, please Mom? We promise we'll help!"

I had to admit the puppy was darling. A black mask across his face, black spots and dappling on his tummy. He licked my hand. He loved me. Of course, I said, "Yes."

My kids kept their promise. They fed him, brushed him, took him outside to go potty and played with him. This is going to be easier than I expected, I thought.

Then, after about a week, I noticed a certain smell accumulating in the backyard. His little nuggets were scattered all over. However, no one was willing to pick them up. I had to do something to turn my children into regular pooper scoopers.

First, I turned to the obvious answer: Bribery. It's every parent's ace in the hole. I figured 25 cents a piece ought to cover it. Then I started doing a few calculations. That little guy was pooping 3 times a day. With 365 days in a year, I was looking at $273! Do you know how many pairs of shoes I could buy with that much money? How many date nights? How many boxes of chocolates? No way. That was too much of a sacrifice. I'd have to come up with a better way.

Next, I considered punishment. I remembered a story my mother-in-law told about how she used to potty train her children.

"If they had an accident, I'd simply rub their nose in it."

I stared at her in horror.

Tempting, tempting. But, I love my children, I really do. I didn't want to have to relinquish them to Child Protective Services. So, I nixed that idea.

"It's only fair," I told my son. "Do you know how many dirty diapers I had to change for you? A million! At least. Maybe two million."

I narrowed my eyes and poked him in the chest, hard, with my index finger.

He rolled his eyes and went back to his video game. Apparently, he'd heard the "I was in labor for nine excruciating hours, and they had to stick a needle the size of a baseball bat in my back just so I could stand it until you finally plopped out, then cried for nine months until I was a walking zombie" story so many times, the diaper changing account paled in comparison.

Then, one day, the puppy pooped in my flower bed.

Huh. Maybe this was a good thing. I mean, I paid so much for his dog food, that stuff had to be premium, right? I could save a lot on fertilizer. I'd just cover the little nuggets with dirt and hope they disintegrated by spring when I started planting my tomatoes. Maybe I could train him to pee on the weeds, too.

Parenting is all about picking your battles. I might have lost the pooper scooper battle, but there were plenty more to be won. Maybe I can get them to learn to clean the toilet. I could always try my mother-in-law's method. 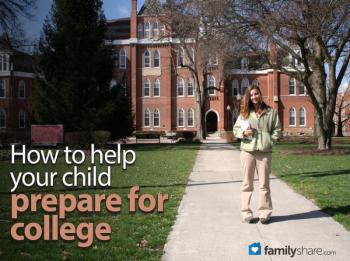 How to Help Your Child Prepare For College