A Typical Response to a Task, Particularly One That is Perceived to Be Unpleasant, is to Put It Off as Long as Possible. The Outcome of Procrastination is Rarely a Positive One.

On the eve of a long-needed trip away for an anniversary, two parents kissed their child good night. She slapped her forehead and exclaimed, "My book report!"

Mom and dad exchanged looks, knowing that their daughter had, once again, waited until the final moment to do a project. The child's response to their inquiries of when it was due was a single word, "Today."

Not only was the report not done, the book had not been read. Mom and dad left the family with a babysitter and a serious catch-up job. After exiting the room, the mother wondered to her husband, "Where does she get this?"

He ruefully took her hand and led her to the refrigerator - which needed to be cleaned out, and in all fairness, the garage - which needed the same. After sharing a laugh, they agreed that they were examples of procrastination themselves.

A typical response to a task, particularly one that is perceived to be unpleasant, is to put it off as long as possible. The outcome of procrastination is rarely a positive one. It usually results in more stress than simply doing the thing which is to be avoided.

There are several reasons for procrastination:

When your child habitually procrastinates, he functions in a higher fight or flight model, and experiences more stress. His academic performance is affected because he is not spending the proper time allotted for a project, and it shows.

There are several ways to help your child avoid procrastinating and develop the skills to manage life's deadlines in a healthier and more productive fashion.

When you are a good example of procrastinating, your children will learn well. If you have a task that you are not motivated to do and are tempted to put off, use it as a teaching moment.

2. Help your teen break large tasks into smaller ones

Teaching your teen to properly manage her time will be a benefit in her studies now and in the years to come. Be careful not to dictate the timeframe or the tasks. Since your teen needs to be the one who is responsible for the project, if she sees this as a directive rather than a cooperative project, she is likely to resist the process.

For many people, having a checklist and seeing things crossed off is a valuable reminder of the process.

Your teen will need to see the value of completing a task and seeing it come to fruition. While there are no parades when he has completed a mundane - and easy to avoid task, these tasks remain. Allow your teen to develop self-esteem by seeing a task through to its completion. He will develop habits that will be long lasting.

Procrastination can cause more problems than the original discomfort your teen was trying to avoid. You can help combat this habit by setting a good example, teaching management skills and helping her see the reward in getting things done. 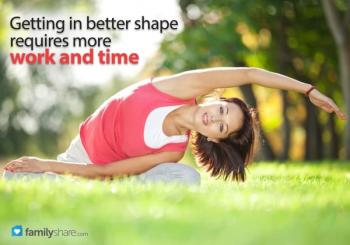 How to Challenge Yourself on a Fitness Level