I remember the proud Tim Gunn moment as if it was yesterday. My 6-year-old Hannah stood in front of the bottom bunk of the bed she shared with her 17-year-old sister, Rose.

I remember the proud Tim Gunn moment as if it was yesterday. My 6-year-old Hannah stood in front of the bottom bunk of the bed she shared with her 17-year-old sister, Rose. She had laid out her clothes for kindergarten the next day: five outfits, perfectly coordinated and accessorized.

"Which one do you think I should wear tomorrow?"

"You're six. This is such a big decision for you?" I asked this in my best Jewish mother inflection.

She looked at me with the utmost consternation. She could not fathom that I did not see the importance of this decision. Sensing the ridiculousness of my words, I tried to recover by pointing with conviction to outfit number three.

"I don't know," she sighed pensively. "I think maybe this one." She held the little skirt and top up to herself in front of the mirror. "Yes, this one."

I left the room, staring down in embarrassment at the shabby robe and worn slippers I was wearing. Nonetheless, I was proud of her for:

She took the time prior to an event to consider the impact of how she presented herself, considering every detail.

Making the decision on her own

Though she did consult me and get my input, she was still able to make her own decision.

Having confidence in her ability to choose

She did not have to worry about how her choice would impact me, because she knew she had my full support in her choices.

How did this happen?

I began when my children were infants to allow them to choose between two or three good things. Though their reasoning capabilities are not based on the same criteria we use, I firmly believe that they naturally learned to think things out. Here are some examples:

These seemingly small choices teach them how to:

Make decisions on their own

Stand by their decisions

This is an important ability, especially when they get older and have to make more important decisions like:

This freedom that you give them will backfire from time to time, and sometimes with harsh results. As their parent, you can only be there to listen when they talk it out. I can remember sitting with that same decisive little girl later as a young adult anguishing over a decision that she thought would destroy her, but in the end, it turned out to be the right choice.

By allowing your children to experience the consequences for these good and bad choices, it will only serve them better, because it gives them even more tools to use when choosing the next time. The sooner these reasoning skills are acquired and the more they are allowed to be used, the more acute their ability to reason will become. And who knows? Maybe they will be the next Tim Gunn. 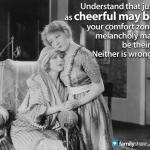 Navigating the Eeyores in Your Life