Whose Life is It Anyway? Three Ways to Empower Your Kids to Follow Their Dreams, Even if They Don't Match Yours.

Many times without us even realizing it's happening, we begin to shape our children's lives in the same way our lives were molded. We unconsciously use the same values systems that our great-great grandparents adopted all those years ago and so generously shared with each generation that's followed. We go to the same kind of church, have the same expectations regarding career choices, and even keep the same set of standards when it comes to what age our kids can start dating, get their ears pierced or stay out until midnight. We're basically traveling down the road of life on autopilot since it's, "Just the way things have always been done."

Until, one day, Junior comes home from school and announces that he wants to change his role on the football field. Instead of making tackles on the field, he wants to make music in the marching band. None of the men in the family have ever contemplated not playing football, so you're totally caught off guard. You're faced with a situation you thought would never be an option. You may have toyed with the idea that he might want to play basketball instead of football, but most certainly not the tuba. And now you're forced to make a major life decision: break tradition and disappoint a long line of all-star football players or let your son be the first member of the family to ever take a single step on the turf with the band. What are you supposed to do?

I'm glad you asked! Here are three easy ways to give your child his roots and his wings so that when he's older he'll be able to pass along the same empowering values and tradition to his own family.

1. Get to the heart of the matter

Spend some time getting to know the essence of each of your kids. They may have come from the same stock, but they're most definitely unique ... just like you and your siblings are. Take some time to find out what each child as an individual likes and doesn't like.

Talk to your child, but more importantlylisten to what he has to say. By giving him a chance to honestly voice the matters of his heart, you might find out that he doesn't really want to play the tuba after all. He just needed your attention but didn't know how else to get it. Once you get into the groove of the whole family being able to speak their truth to each other, you'll have laid the foundation for self-confidence, healthy relationships and a life of integrity.

After you've uncovered the real reason your child wants to "break tradition" and everyone's had a chance to have their say, let him decide what he'd like to experience - within reason, of course. If he wants to play the tuba rather than football, allow him to find out for himself whether he really likes it or not. Life is full of choices, and if we're always making them for our children they'll end up like the Israelites wandering through the desert for 40 years. Or worse yet ... living at home until they're 40!

3. Love your child through it

If in the end playing the tuba trumps making tackles and it turns out to be an epic fail, you'll be blessed with another opportunity to share in the growing pains with your child. Once again using your effective communication skills of listening to your child's heart, you'll quickly become the only counselor your family will ever need. You'll be able to gently guide your child through his disappointment into a place of being able to glean out the positives and move forward with a fresh and healthy perspective. You'll have trained up your child in the way that he should go so that when he is old he will not depart from it. You'll have blessed each one of your children with roots, wings and his own voice. 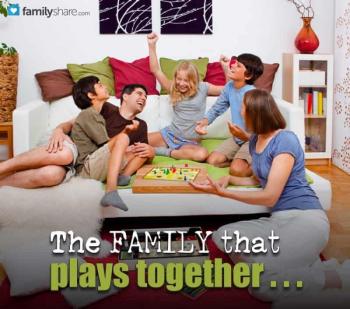 10 Essential Board Games For Your Family