Here are 8 great family moments from this year’s Oscars

The Academy Awards Are All Finished. and While "Spotlight" Won Best Picture, There Was Another Winner on Sunday Night: Family.

You see a lot of the same at the Oscars every year.

Sometimes it's the tears from award winners, other times it's winners speaking too long or getting cut off by the music. But almost more than anything else, you'll often see award winners thanking their families.

As Quartz's Keith Collins reported in January, those who win at the Academy Awards will thank members of their family more than God 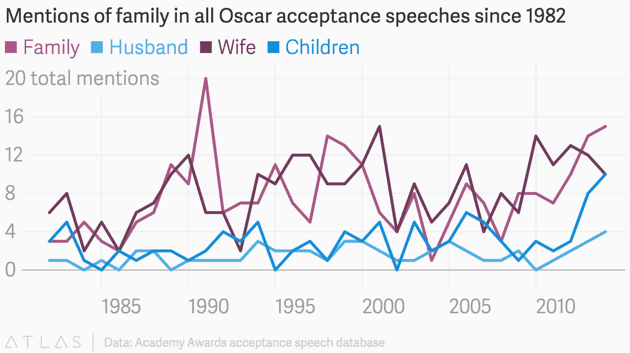 We saw this Sunday night at the 2016 Oscars among many award winners. But these words of thanks were far from the only family moments from this year's award show. Here are eight family moments you saw during the Oscars.

Jacob Tremblay shared a family photo before the award show

What better way to kick off the family side of the night than with a road trip to the award show? That's what 9-year-old Jacob Tremblay ("Room") did on Sunday night.

While on his way to the show, Tremblay shared a photo of himself in the backseat as his parents took selfies of themselves and their breakout star of a son, according to Entertainment Weekly.

This clearly didn't end throughout the night. He also took a selfie with his on-screen mom from "Room," Brie Larson.

Chris Evans ("Captain America") brought his sister to the award show, while Leonardo DiCaprio ("The Revenant") brought his mother with him.

.@ChrisEvans brought his sister as his #Oscars date! Best brother ever. pic.twitter.com/K38sUcLdNE

Backstage at the #Oscars with @ChrisEvans pic.twitter.com/pV1AcIZA28

"I'm here with my mother," Leo DiCaprio (in Giorgio Armani) at the #Oscars. https://t.co/enVmSykD5t pic.twitter.com/I06ChCRQ1y

Adam McKay, who won an Oscar for best original adapted screenplay for "The Big Short," thanked his daughters. 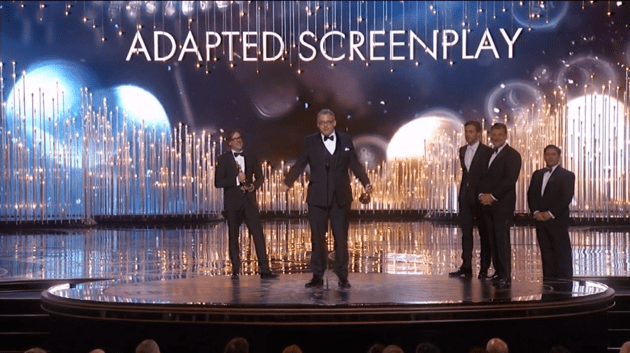 I'm just glad Pearl got the recognition she deserves.

Also, the winners of Best Animated Short Film for "Bear Story," Gabriel Oscorio and Pato Scala, thanked their families, too.

Your child's favorite toys made it on stage

Before the Oscars went to a commercial break, three familiar faces to children came out on stage: C3PO, R2D2 and BB8 - the popular droids of the Star Wars films.

BB-8, R2-D2, and C-3PO make an appearance at The #Oscars tonight pic.twitter.com/730nzEMuuG

Not too long after, the Minions from the "Despicable Me" and "Minion" movies came out on the stage for a silly moment.

i'm crying but they don't sound like themselves? #Oscars pic.twitter.com/aletsJ5c7j

Just after a commercial break, host Chris Rock told a story about how he has spent so much time working on the Oscars that he hasn't helped his daughter sell Girl Scout cookies.

So he asked all the attendees to spend money and buy some Thin Mints.

Wasn't as hard as I thought it would be... #oscars pic.twitter.com/H7XZMm4dlG

The #Oscars just turned into a giant ad for Girl Scout cookies and we're not mad about it. ??? pic.twitter.com/JQnPBBPINg

The real surprise here is that anyone - particularly celebrities - carry cash. #Oscars pic.twitter.com/gfox6aYeMC

Christian Bale and Matt Damon are sharing a box of cookies across the aisle.

Rock said later his daughter raised $65,243 on the night. He closed the show asking those in attendance to buy some more cookies.

"Inside Out" wins for Best Animated Feature Film

"Inside Out," a story about a young girl's emotions as she grows up, won the award for Best Animated Feature Film. The film taught how we think about emotions. And as my colleague Chandra Johnson noted, the film was a sign of how sophisticated children's films have become.

Toward the tail-end of the show, Vice President Joe Biden came out on stage to a thunderous standing ovation and talked about how many sexual assault victims refuse to come forward, often worried that it's their fault for being assaulted.

But he said it wasn't their fault.

The vice president then introduced Lady Gaga on stage, who performed her song "Till It Happens to You," which comes from "The Hunting Ground," a documentary that discusses the difficulty of sexual assault victims on colleges campuses.

Larson played the struggling single mother in "Room," a movie about a mom and son's struggle of living in a room under the guise of a sexually and physically abusive man. Larson took home the award, thanking her co-star and onscreen son Tremblay during her award speech. 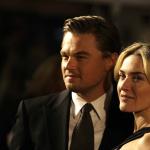 What Leonardo Dicaprio and Kate Winslet Can Teach…