I'm Not Going to Sugarcoat This, Ladies.

He doesn't want to be in a relationship and you don't know why. So you spend your restless nights with Ben and Jerry, wondering what's wrong.

Well, I've been a guy my whole life and I guarantee you that if he's not interested it's for at least one of these reasons. You may or may not agree with them. Some of them are cold, insensitive and shallow; but whether you like them or not, here are the possibilities:

1. He's not attracted to you

Attractiveness is key to any romantic relationship. It just is. If he's not attracted to you he'll never admit it because he doesn't want to hurt your feelings. Sorry hun; sometimes that's just the way the cookie crumbles. You'll find the one.

Change can be scary.

3. Or he dislikes commitment

He may view commitment as a restriction to his freedom ... like pants.

4. He's afraid of the future

It either ends in marriage or pain ... or both. That's daunting.

Bad experiences in the past tend to affect present decisions.

Literally. Gynophobia. It's a thing.

7. He has other priorities

Maybe he puts school, his career or Star Wars collectibles ahead of you.

9. He's unsure how he feels

Maybe you are the only girl he's dating and he just can't decide if he likes you more than his ex-girlfriend's roommate.

10. He thinks you're too good for him

This is less flattering.

12. He just got out of a relationship

He may want to wait to make sure you're not the rebound.

He may also be worried about how swapping ladies so fast will affect his reputation (this is lame) or about the feelings of the last girl (this is less lame).

13. He's already in a relationship

14. You're already in a relationship

This is equally as awkward.

All hands on deck! Haul anchor and set sail for calmer waters.

16. He likes playing the field

Always a groomsman, never a groom.

He may honestly just be so caught up in work and chopping wood that he doesn't feel like he has room in his schedule for you.

Nobody is good enough for mamma's little boy.

20. He heard a rumor about you

Hopefully your male has the social skills to remedy these.

21. He feels it's the wrong decision

He may have no other reason other than a gut feeling.

He may pray to know how to move forward and feel that God wants him to move down a different path. It's tough to argue this one.

But be careful; your male could be using God as a scapegoat so you blame Him and not him. Don't do that.

Many people are encouraged to marry within their own religion. If you're a different religion it may be a red flag for him.

Dating means dates. Dates mean money. Money means work. Work means effort. If he doesn't think you're worth the effort, he's an idiot. Move on, or show him this article.

25. You're too high maintenance

You're just too different. He'd like to be able to connect with you on a deeper level, but cats just aren't his thing.

If you both have a family reunion planned for the same day, you might be in trouble.

Did I miss any? 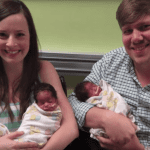 How a White Christian Family Gave Birth to…