How Divorced Dads Can Stay Close to Their Kids

Being Divorced Doesn't Mean You've Divorced Your Children. of Course, You Know That, But Some Dads Seem to Forget.

Being divorced doesn't mean you've divorced your children. Of course, you know that, but some dads seem to forget. Perhaps, more accurately, they simply give up because it's difficult to stay close to their kids, especially when they live far away and are not the custodial parent.

Reasons why some dads give up

Your ex-spouse makes it difficult for you to see the children, or even to communicate with them.

You think about your kids, but you are so busy trying to make your own life happen that you don't follow through with a call to them.

You don't realize how much you mean to them. Kids have a hard time letting parents know how much they care, but that should never leave you discouraged. Deep inside they are yearning to hear from you, to be with you.

Plain and simple, kids want to have a loving relationship with both parents. You can't leave it up to them to make it happen, even if they're teens or older. It's your job, not theirs. For the most part, they don't know how to make it happen. A young adult child of divorce said, "I call my dad, but he doesn't pick up. I hate it when it goes into message mode. To me, that says he doesn't care." That's probably not true, but it seems that way to her. Pick up the phone. If you can't, be sure to call back. Be proactive with your child and keep in touch. Most times, all they need is a listening ear from a dad who loves them.

Once a month is not sufficient. At least once a week is good. If they don't answer, leave a message. Always leave a message. Don't assume they'll see your number and call back. After you leave a message, if they have their own cell phone, text them saying you left a message and want them to call you back. Kids always read their text messages, which brings us to this next point.

Text them with a short message

Sometimes, all you need to say is, "I'm thinking about you. I love you." Or, "I miss you!", "How did it go with your math test (or your game) today?" You'll never know about a math test or a game unless you've been talking with him or her regularly. They need to know you care.

What if they failed the math test? Validate them with a comment like, "That's tough to fail a test. I know. I've failed a test, too." That's being honest. They'll love that you understand. Then, you can say, "What do you think you could do next time?" Give them respect and the confidence that they can figure it out.

Make plans to be with them,

then follow through on the plans. Communicate the plans with their mother, showing courtesy to her, even if she is less respectful in return. If you keep up the courtesy it's more likely she will do the same for you, eventually. Make sure you communicate the plans clearly to your children.

Be with them as often as you can,

or at least as often as the visitation rights allow. They need to know they can depend on you being there for them. These visits will mean far more to them than you can imagine. Don't disappoint them. If you've kept in touch through calls and texts, they are more likely to look forward to being with you. Your relationship will already be well-established.

Sometimes a dad's voice can become accelerated and loud without his noticing. The child will notice and think you are yelling at him or her. Be aware and don't yell. That will put a barrier between you and your child. Nobody wants to be with a yelling parent. Be kind and respectful, even when you need to be firm. They'll appreciate it.

Send gifts for their birthday and Christmas

Being remembered, even if it's a card with some money, says you are thinking of them. Gift remembrances are just another way of saying "I love you."

Always show respect to their mother

That will be significantly important in the respect they will feel for you. You can show respect without being run over and treated poorly. Be kind, yet strong, as you work with their mother on their behalf.

When your children's mother makes it difficult for you to stay in touch with them, don't give up. Don't be like the mutt that whimpered off into the sunset with his tail between his legs. When it comes to your children, stand up, be respectful, and be determined. Find a way to let them know how important they are to you. When they know this, they will gradually gravitate to you, even if it takes a few years to happen. It will be well worth it. 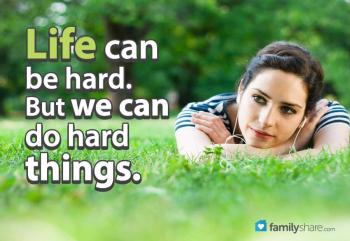