How Does Your Child’s Birth Order Influence Their Personality?

There is scientific proof that supports a child’s birth position within their family has unique challenges which inadvertently affect their personality.

Believe it or not, there is scientific proof that supports a child’s birth position within their family has unique challenges which inadvertently affect their personality. The oldest, middle, youngest, and only children possess personality traits native to their birth position. While everyone may not check off all of the boxes within a category, the majority of the general characteristics are applicable.

Interesting, right? Here is what we found.

Let’s be for real; firstborns are trial-and-error babies because their parents did not really know what they were doing. Parents most likely read every parenting book and attended the first-time parenting classes available on how to be the best parent; however, later, they will find out that there is no class or certification that credits someone as being the best parent. In fact, parents are more likely to waste time worrying versus enjoying parenthood.

Firstborn personality traits include reliable, meticulous, cautious, goal-oriented, and being somewhat of an overachiever.

Michelle P. Maidenberg, Ph.D., a child and family therapist in White Plains, New York, says, “They often have an intense fear of failure, so nothing they accomplish feels good enough. They’re typically inflexible – they don’t like change and are hesitant to step out of their comfort zone.” Nonetheless, most firstborns have Type A personalities.

Since firstborns are given a lot of responsibility within the home, they tend to take charge later on in life and can sometimes be bossy.

The middle child is oftentimes the people pleaser because they feel like they are constantly being compared to their older and younger siblings. “The middle child often feels left out and a sense of, ‘Well, I’m not the oldest. I’m not the youngest. Who am I?’” says therapist and author Meri Wallace. Since middle children feel a sense of displacement, they usually assert themselves with their peers.

Middle children are often rebellious, popular, very social, and deemed as the peacemaker.

Middle children go with the flow and possess a great understanding of negotiating and compromising – they’re able to get along with just about everyone. Linda Dunlap, Ph.D. professor of psychology at Marist College, says, “They're usually the first of their siblings to take a trip with another family or to want to sleep at a friend’s house.” Middle children are aware that they do not receive as much attention from their parents and can sometimes feel lost and seek validity.

These kids are the most free-spirited and often referred to as strong-willed because they are used to living with fewer rules and regulations. Oftentimes, parents are mentally exhausted and much more lenient with the youngest child.

If a child doesn’t have anyone else to compete against, they will always have their parent’s support and resources without any distractions. While the constant attention and support is a plus, sometimes it can also be a con and emotionally cripple a child later in life.

Only children tend to be perfectionists, very mature, diligent, and excellent leaders.

Each child is unique and is equipped with their own personality traits, but there is proven science to help better understand why an individual possesses certain traits. By understanding the birth order influence on an individual’s personality, parents (and teachers) can better interact and identify how to help children grow up and function within their everyday lives. Having more knowledge of behavioral mannerisms and tendencies can help a child cope and better understand hardships and successes. 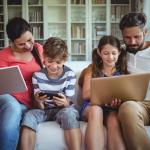 14 Ways to Teach Your Kids About Taxes