How to Avoid Turning into a Pillar of Salt

Upon Fleeing From Sodom and Gomorrah, Lot's Wife Looked Back and Turned into a Pillar of Salt. Here Are Some Ideas For How We Can Keep Ourselves and Our Children From Experiencing a Similar Fate.

Do you ever suffer from the "would-have, could-have, should-have" disease? Do you find yourself standing at the kitchen sink, hands in warm soapy water, mind wandering and wondering, what if I would have married my old boyfriend, what if".. what if I could have married someone who was rich"..maybe I shouldn't have had so many kids".. and so on?

There was another woman who looked back and probably wondered if she would have, should have, could have. We don't know her name, we only know her as Lot's wife. The Book of Genesis tells us, "But his wife looked back from behind him, and she became a pillar of salt." But that is not where the story begins.

The real story begins five chapters earlier when Genesis tells us Lot, ""pitched his tent toward Sodom." And in the next verse it tells us that he knew that Sodom was full of wicked sinners and yet he chose to raise his family and sustain his marriage there.

Clergy leader, Tom Perry, once said, "Most of the problems that Lot later encountered in his life (and there were several) can be traced back to his early decision to position the door of his tent to look upon Sodom."

Most of us don't pitch tents these days, but most of us are surrounded by the same evils that plagued Sodom and Gomorrah. All we have to do to find the same toxic behavior that led to the Lord destroying Sodom and Gomorrah is turn on our television, or the little phone in our pocket.

After Lot's tent is pitched the story continues. The scriptures describe the men of Sodom as, "wicked and sinners before the Lord exceedingly." Interesting word, "exceedingly." Sodom is so wicked that the Lord decides to destroy it.

The Lord sends angels to check out Sodom and warn Lot. After a series of events, which make it obvious Sodom is immoral, Lot is told to leave because the Lord is going to destroy Sodom and Gomorrah. You would think that after having been told by angels to flee, Lot would have immediately picked up and run for the hills, but he didn't. Lot Lingered. The angels had to put their hands on Lot, his wife, and two daughters and remove them.

When Lot is out, the angels tell him, "Escape for thy life, look not behind thee, neither stay thou in all the plain; escape to the mountains lest thou be consumed." Then the Lord rains down brimstone and fire out of the Heavens on Sodom and Gomorrah. He destroys the cities and surrounding land.

Then the scriptures tell us, "But his wife looked back from behind him, and she became a pillar of salt."

Here are five principles from the story of Sodom and Gomorrah that we can use to keep ourselves and our children safe from many of the perils that plague our society:

Stand in safe and uplifting places

The places we choose to live and play impact us. The world can be toxic. We have only a few sanctuaries including our homes and churches. Fill your sanctuary with uplifting art, music and entertainment. Depending on where you live, your only option may be to close your tent doors and insure that your families only view things which lead them in the direction of your Higher Power. Create a home that is a sanctuary for your family from the world.

A religious leader, Jeffrey Holland taught, ""what did Lot's wife do that was so wrong? " Apparently what was wrong with Lot's wife was that she wasn't just looking back; in her heart she wanted to go back. It would appear that even before they were past the city limits, she was already missing what Sodom and Gomorrah had offered her. " So it isn't just that she looked back; she looked back longingly. In short, her attachment to the past outweighed her confidence in the future. That, apparently, was at least part of her sin - she did not have faith. She doubted the Lord's ability to give her something better than she already had. Apparently she thought (fatally) that nothing that lay ahead could possibly be as good as those moments she was leaving behind." Trust God and look forward with faith. Lead your family with a positive faithful attitude.

Surround yourselves with righteousness

In another quote, Holland said, "" such people know they should have their primary residence in Zion, but they still hope to keep a summer cottage in Babylon." In other words, there are people who know what they should do, but they enjoy doing what they shouldn't. Choose to bring people into your life, and your children's lives, that are uplifting and have positive family values. Who you spend time with matters. Your children are watching.

Do what the Lord asks quickly

In the scriptures, God has provided us with a blueprint for life. His voice of warning is found in the commandments. Do not linger or barter for more time. Follow the Lord's admonitions quickly, without looking back in regret.

The atonement of the Savior erases sin. It is important to remember just enough that we don't repeat sins. Don't wallow in yours or others' past mistakes and bring them up in your mind, your heart or your arguments with your spouse. If your spouse has repented of a wrong doing and you forgive him, don't look back, let it go.

A prominent religious leader, Gordon B. Hinckley once said, "The traditional family is under heavy attack. I do not know that things were worse in the times of Sodom and Gomorrah. " We see similar conditions today."

Position your tent toward righteousness and quickly carry your family safely forward with faith. Leave your Sodom and create a spiritual sanctuary on earth.

Holland shared one of the shortest scriptures in the Bible, the Savior's heavy warning, "Remember Lot's wife." 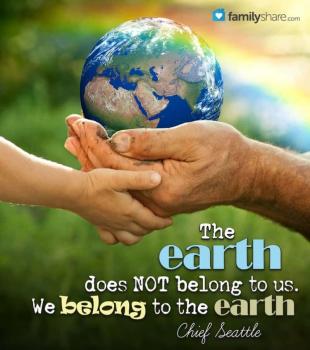 Pollution Prevention: Get Your Family Involved