How to Be Married – and Stay Married – to a Pregnant Woman

For the Next Nine Months, Dad, Here's How to Make Yourself Useful.

Editor's note: This article originally appeared in the Gwinett Daily Post. It has been reprinted here with permission.

Welcome to another installment of my occasional series for men on embracing adulthood and becoming a decent husband. Today's topic is, "How to be married to a pregnant woman," which I chose after rejecting, "How to drive a nail through your foot," and, "How to set yourself on fire."

My wife and I are well beyond our child-bearing years (fingers crossed), but we do know several young couples who are expecting - and frankly, some of those husbands are screwing up. As someone who has been through the ordeal - I mean, the wonder and beauty of childbirth - four times, I thought I'd try to help them out, along with all the rest of you guys who find yourselves in the same predicament.

First, if you are married to a pregnant woman and wish to remain married, you must understand that for nine months (and perhaps a bit beyond), you will be at a complete disadvantage.

You were there when the child was conceived. You may help to feed and clean and clothe the child once he or she is born. You even may be the one who primarily supports the child financially. But, in the meantime, it is not growing inside your body. It is not making you fat and cranky or giving your hormones a five-day pass to Disney World. Therefore you have already conceded the high moral ground and are, for the time being, not doing anything.

Your job, at this point, is to say, "Yes, dear. Whatever you want dear."

In addition, you must grasp that there are some things you simply do not say to a pregnant woman if you wish for your marriage, and perhaps your limbs, to remain intact. Here are just a few examples:

"I think I might want five more kids. How about you, honey?"

"But what if you don't lose all the weight?"

Next, you must accept the fact that you will probably not be able to do some things, or at least not very often, for the next nine months. And since one of those is probably your very favorite thing to do on earth, going without may require some sacrifice.

Yes, I've heard that there are women who like things even more when they're pregnant. But I've never seen any direct evidence of this, so I rate such claims along with Bigfoot sightings and "signs that the economy is improving."

Just be patient. The day will come when you will once again be able to watch sports on television.

Finally, you must recognize that a woman who is pregnant is not entirely in her right mind, at least not all the time. One minute she may be trying to drive a wooden stake through your heart while you sleep, and the next minute she's begging you to run to the supermarket for Chips-Ahoy cookies right after you rub her feet with cocoa butter.

Do not attempt to make sense of this. Simply accept it, looking forward to the birth of your child and the beginning of life's next great adventure. 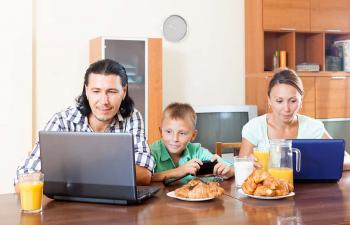 6 Technology Hacks That Will Change Your Life