How to break your baby’s binky habit

Making the decision to get rid of a binky can be daunting and tantrum-inducing. Here's how to make the transition a smooth one when the time is right.

A binky can be a wonderful tool to help your baby soothe himself to sleep, and can help mom and dad get some much needed sleep while the baby is young. But at some point, everybody needs to face the truth: The binky has got to go.

Whether you're a stickler who says the binky goes out the window on baby's first birthday, or more laid back and keep binkies around until kindergarten graduation, the fact remains that you will have to be the one to get rid of it at some point. Two questions arise: How do I know it's time to lose the binky? And, more importantly, how do I go about getting it out of my life?

How long is too long?

The first question is the trickier of the two, surprisingly. Most babies only need the binky while they still have a sucking reflex. The sucking reflex is a primitive reflex that all babies are born with (unless they were born prior to 36 weeks gestation) and actually disappears by the fourth month of life (for preemies, use their adjusted age). Around the end of the fourth month of life, sucking ceases to be an involuntary reflex and becomes a voluntary motion. Just because it's voluntary doesn't mean it's useless, though. Babies will continue to rely on sucking to self-soothe long after their first couple of birthdays come and go. The American Academy of Pediatrics recommends that all children be suck-free, both thumb and pacifier, by the time their permanent teeth begin coming in.

So, the good news is you can probably relax a little, letting the baby hold onto the pacifier for a little longer won't do any permanent physical damage.

It's hard to say goodbye

Keep in mind that daycare centers and preschools may prohibit pacifiers, and prolonged or constant use of pacifiers can inhibit the proper growth of permanent teeth. When you decide it's time for the binky to go bye-bye, here are some ideas to get you started.

First, decide up front if you are going to get rid of the binky cold-turkey or if you are going to wean your little one off of it. Whichever you decide: choose a plan of action and stick to it. Nothing is more difficult to overcome than a waffling attitude when it comes to parental policies.

If you decide to wean the pacifier away, make it a sleep time only device. Some parents allow the binky to be used as a calming device whenever the child is upset, but this basically tells the child that she will get her beloved binky back if she gets really upset. Allow the binky only at nap time and bedtime, so your child can soothe herself to sleep, but during the day she has to find other ways to calm herself.

If you decide to go cold-turkey instead, here are several suggestions for making a clean break:

1. Make a ceremony of disposing of the binkies

. Have your child find all the binkies and get a reward for turning them all in. Then toss them in the trash, making sure they cannot be fished out by a determined toddler when you aren't watching.

2. Pass the binkies on

. If there's a younger sibling on the way, or a baby cousin who needs the binkies, have your child donate them. Emphasize that binkies are for babies, and since he is so big now, he will not be needing his binkies anymore.

3. Turn the binkies over to the childhood authorities

. This one may take a little more planning and creativity, but parents who have gone this route swear by it. Childhood icons - such as characters at Disney, mall Santa and Easter Bunny, and the like - will gladly take a binky off your hands. You might think it sounds a bit silly, but they are all actually given dozens of binkies every single day, with a message to give it to a kid who needs it more. It's similar to the idea of donating the binky to a relative or friend, but the added celebrity-factor makes even the most reluctant kids willing to part with their paci.

4. Have a visit from the Pacifier Pixie

. Much like the Tooth Fairy, the Pacifier Pixie collects pacifiers left under a child's pillow and leaves a reward in return.

Remember, once you've made a decision, don't go back. And, remember: No child ever started college with a binky in their mouth, so chances are your little one will outgrow his attachment to the pacifier.

Gina Denny is a homeschooling mother of three, living in Phoenix, Arizona. You can read her blog at ginadenny.blogspot.com or reach her on twitter @GinaD129
nextarticle 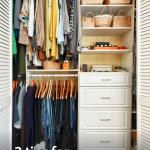 Too Much Stuff? How to Can the Clutter