How to cope with grief after a miscarriage

Women who experience miscarriage often don't know how to grieve, how to communicate their loss to others or how to move on. Here are some tips to help deal with the pain and find peace.

There's a quote from an unknown author that says, "A woman becomes a mother when she finds out she's pregnant. A man becomes a father when he holds the infant in his arms." This is one reason why miscarriage can be so very hard on women. The moment we find out we're pregnant, our every thought is of the baby and the future. We wonder if the water in the shower is too hot, if lying on our left side when we sleep is OK, if we are exercising too little or too much, if we're taking enough folic acid to prevent neural tube defects.

So all-consuming become the thoughts of the baby that, even when it's a tiny 5-week-old fetus no bigger than a lower case "o" on this page, it is completely real to us. And when cramps and bleeding begin, signaling a miscarriage, it's like a fully-formed baby has died. Whether you knew you were pregnant for two days or 10 weeks, having a miscarriage is one of the hardest things you'll ever go through. But take heart. You aren't alone, and though the pain feels overwhelming in the moment, there are ways to cope.

This is the number one piece of advice I was given following my miscarriage. But of course, it's easier said than done. The facts are, between 10 and 20 percent of known pregnancies end in miscarriage, 80 percent of which occur before 12 weeks gestation. Fifty to 70 percent of those first-trimester miscarriages are simple cases of chromosomal abnormalities that won't allow the egg to develop.

Translation: Miscarriage is not your fault and it happens way more often than you think, but you'll still find yourself wondering if there wasn't something you could have done differently. This is normal. Don't beat yourself up about it, and in time you'll come to realize there is no reason to blame yourself.

Allow yourself to grieve

It might seem silly to grieve when you didn't even know the child. You didn't know its gender, and in some cases its heart might never have begun beating. It doesn't matter. That child was real to you and you'll only stunt your grieving process if you belittle your own emotions. Let yourself cry, let yourself be miserable for a time. Don't hold anything back, and eventually you'll cry yourself out. The time will come when you'll be able to move on.

Write down your thoughts

It will be painful at first to write down what you're feeling, but when it feels like you can't talk to anyone else, the written word has an amazing ability to heal. As you write out your thoughts and your pain, you'll be able to analyze your own healing process. Day by day, you'll be able to watch yourself getting better, getting stronger, getting through it. If you feel so inclined, you might write a letter to your lost baby, then bury the letter, burn it or put it in a bottle and throw it out in the ocean. It might be the only memorial service your little embryo has.

Talk to people (when you're ready)

You might not want to talk to anyone at first, and that's OK. Sometimes saying it out loud, acknowledging the truth that you've lost your pregnancy, is too much to deal with. When you're ready, choose someone you trust to confide in, whether it's your spouse, a close friend or your mom. Tell that person everything. Cry on that shoulder for a while. Don't ever feel pressured to stay silent, keeping the hurt bottled up inside. Sometimes it helps just to know that other people know your baby was alive, that he or she existed, and that the world is a little different because he or she was here.

Take some time for yourself

When parents lose a child, people expect them to take time before they feel like socializing or being normal again. This consideration isn't always extended to people who experience miscarriages, if for no other reason than fewer people knowing you lost a pregnancy. You'll have to be intentional about taking some time to yourself. Get a pedicure, go watch a chick flick, go out to a nice restaurant or spend an afternoon at the library. Do something that helps you relax, and do it just for yourself.

When I had my miscarriage, for a time, all I wanted was to forget it had ever happened. The knowledge that I had lost a baby had changed me fundamentally, and it was a long time before I was really happy again. Though I wouldn't wish the experience on my worst enemy, I know I am a better person now for having weathered that trial. I'm more empathetic, I hug my family a little tighter, and I know that when I get pregnant again, I'll appreciate having a healthy pregnancy so much more. Hopefully, you will too.

See related article: What not to say when someone loses a child 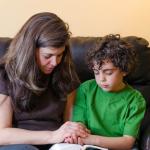 Partnering With God in Parenthood