How to deal with your parent’s remarriage

The remarriage of a parent, whether through divorce or death, has a significant impact on the children. As children see things through the parent's perspective and focus on the positive aspects of the situation, a parent's remarriage can be easier.

After my mother's death, my father's grief was immense. He would sit by her grave for hours and just talk to her. As children, we worried that he would never recover, and because of this, we were shocked when, seven months later, he decided to remarry.

The remarriage of a parent, whether through divorce or death, has a significant impact on the children.

Here are some suggestions for how children can learn to cope with their parent's remarriage.

Look at things from your parent's perspective

This can be difficult for children. I was still grieving the loss of my mother when it seemed my father had moved on. After I thought about it for a while, though, I could understand. My parents were together for 31 years and in an instant, that was taken from my father. He was lonely and alone, without a companion or a best friend. He longed for that connection, and found it in his new wife.

Understand that it is your parent's life and her choice

She is not asking you for your permission, but she is asking for your support. Being negative may not stop the marriage, but it will put bad feelings between you. Acceptance is a very important part of moving on.

Don't view him as a replacement

Understand that your parent's new spouse is not a replacement for your real mother or father. It is someone your parent can enjoy the rest of their life with, and someone who can help your parent find joy again. At first, this was again something hard for me to accept. I felt that my father was trying to replace my mother, but he was not. My mother is and always will be my mother, but a stepmother is OK too.

Learn to forgive and don't compare

Seeing my father happy with his new wife was one of the hardest things to deal with in his new marriage. My mother was very sick, and I could not remember him being that happy with her. But what I had to learn was forgiveness. It was not my father's fault my mother was sick. I had to forgive him and his new wife for anything I felt they may have done and then I had to forget and never compare his new marriage to his marriage with my mother.

Extend a hand of friendship

Accept your new stepparent and do all you can to help him feel welcome in the family. Do not treat him as an outsider.

Do not feel jealous or guilty

You are not betraying your real parent by loving your stepparent. This was a tough one for me. With a new marriage comes a whole new family. Often I became jealous when the new family would occupy my father's time when I thought he should be spending his time with us. Beware of jealousy and don't allow it to control your thoughts. On the flip side, don't feel guilty for loving your new stepparent. There is more than enough love for both.

Accept your new stepparent's authority. They are doing their best to love you by taking on the role of a parent.

Look for the good in your new stepparent. This will go far in helping you learn to love them.

A parent's remarriage can be a stressful occasion for everyone, but by working together, it can be a time of joy and new beginnings. 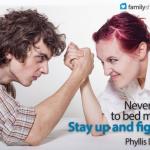 How to Fight Fair and Win: Resolving Conflict…