How to Embrace Your Dirty Little Secrets

Are You a Mom Like Me That's Ever Watched the News and Seen Someone in a Coma and Thought, "Oh Man What I Wouldn't Give For a Good Coma Right Now?" if You Have, Don't Sweat It -you're Human. Maybe It's Time to Embrace Our Dirty Little Secrets.

On a talk show the other day, a group of women were talking about the dirty little secrets they keep as moms. One of the woman said that sometimes she doesn't like her kids.

I started laughing out loud. Really? That's your big secret? Sometimes you don't like your kids? Duh.

Do you ever have those days as a mom, where you're just sure the Department of Family Services is minutes from showing up at your door to take your kids away? Instead of fearing it, do you wonder what in the world is taking them so long to get here? Or how about watching the news? You see someone in a coma and you sigh longingly and think, "Oh man, what I wouldn't give for a good coma right now." That's not even my dirty little secret. That's my reality. I'm a mom.

I love my kids, but sometimes Leave it to Beaver mommy is on holiday and she's left Kathy Bates from the movie Misery to babysit. The crazy in me usually peaks during tax season. My husband's an accountant, which means for three months every year, I'm a single mom and I enter survival mode. Here are five ways I do it.

It's tax season again and I noticed the other day that without even being aware of it, I have gradually been putting parts of my kids' beds away in the linen closet. First it was the throw pillows, then it was the sheets (I left the fitted sheets ... for now) and yesterday I took their comforters out of the duvet covers and packed those away too. Now, I simply toss the comforter in the air like a laundry detergent commercial and leave it where it lands.

The beds aren't looking good anymore, but frankly neither am I. If I don't spend the time on me you better believe those kids of mine aren't looking great either. I took them to lunch the other day because we had to get out. I wore the same jammies I had worn since the start of tax season along with the same ponytail. My daughter wore sweatpants under a skirt, her older brother's moon boots, and a swimming suit top with a nice church sweater over it. Who am I to judge? Maybe that's all it takes to look like you made an effort. Toss a good sweater on top of your grungies and kudos to you for classing it up. The two boys wore jammies as well. We walked into the café and I immediately noticed a small group of women that went to high school with me. On our way out I decided, to say, "Hi". I felt good about myself for making them feel good about how their lives had turned out.

How many times do we stand outside in little groups watching the neighbor's kid who has escaped yet again wearing only a diaper? We shake our heads while saying how we can't believe his mother has the audacity to have another baby when she obviously can't control the ones she has now. All while the poor woman's probably inside her house puking her guts out, with morning sickness.

I've discovered something: Almost every time I judge another woman, I'm put in my place immediately by my own mothering skills or lack thereof. That particular time it was seeing my own escaped child (only mine was naked) who in that moment happened to be defecating on my next door neighbor's brand new curbing.

Growing up my mom use to say to us, "You're just as good as anyone else, but you're no better." I'd like to add that perhaps "You're no worse either." I'd say the large majority of us are great moms. We're all just trying to survive and do our best. What we need is to give ourselves and each other a major break.

Who'd you rather be? One woman I ran into at the grocery store who looked perfect said, "Oh man I wish I had your guts to go out in public looking like that." Or, the next door neighbor who calls me on the phone, laughing hysterically because she's seen what my child has left on her new curbing. She tells me not to sweat it and that she's surprised it wasn't one of hers. Instantly I love her and vow to be more like her.

My kids watched two hours of straight TV today while I napped. I fed my ten-month-old cake for breakfast. I saw my two oldest kids buck naked peeing in the neighbor's yard (I promise they really are house broken) and heard my daughter repeat a word I use on occasion, but shouldn't. That's just in one day. Immediately the voice in my head starts to let me know what a crappy mom I am. The only problem is it doesn't acknowledge all the things I did right today. Like getting up at 4:45 am to go to the gym, coming home and making a warm breakfast for my husband and kids, playing with and reading to my kids, setting up play dates and making healthy lunch and dinners. Let's be honest, we do more things right than we do wrong and that's something.

None of us should be shocked at each other's dirty little secrets. We should be relieved knowing that not one of us is perfect. We are normal. This is normal. Some days we're awesome and some days we're just trying to survive. It's called motherhood. We're all doing the best we can and that's good enough. 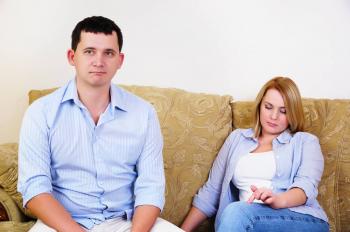 6 Ways to Improve Communication in Marriage