It is said that boys spend the bulk of their time on video games and pornography. My experience says they got it half right.

My son, Ihoma, (name has been changed to protect the Ihoma) is a Master Captain of Blue Rubicon Universe Squadron Beta. I have no idea what that means. I hope it is a good thing.

Ihoma is a decent boy. He asks permission to swear in front of us (his parents) and he cleans his room twice a month, which wouldn't be tolerable except that he is not the kind to clutter or hoard. He even is gracious enough to let our old dog sleep in his room - with all the stuff old dogs are famous for.

I do know that he spends an awful lot of time in the basement playing Xbox. Granted, he is good at what he does. He has won tournaments around the county and is revered in cyber-circles worldwide. I often hear him on line speaking to who knows who from Manchester, or Prague, and one weirdo from Boise who ended up being my brother.

If I were a world-renowned Xbox champion, I wouldn't want to do any dishes either. But dishes must be done, and the garbage must be taken out, and it doesn't seem like a good-dad thing to step in and do it all myself - though it gets done faster and with less grief if I do.

It would be so easy to just ground him, or banish him from all things electronic if he had bad grades or harsh notes coming home from school. But he doesn't. I would throw the Good Family Rule book at him if he ever landed a punch or started a fight. But he hasn't.

He texts a lot, but never with an "S". I know because I sometimes grab his phone when he is beating up on me during family home evening and check his messages while he has me in a choke hold. Nothing that I could ground him for even if I wanted to.

He forgets to brush his teeth for a week, but I can handle that. And with all this "not getting into trouble" stuff, you would think I would be happy to have him come home and go directly downstairs to his captain's cushion to dominate weaklings of his cyber world for two or three hours. But I'm not.

It's true that I worry about violence. When he's an adult and has to deal with real-world problems, I don't want his mindset to be, "You stabbed my cyber-queen, now you will pay!"

So I have been experimenting.

The one week Ihoma was unable to play due to circumstances beyond his control - and certainly beyond mine as I had nothing whatsoever to do with the machine's poor performance and how presumptuous of you to make that kind of completely unfounded accusation, Jeesh! - he spent most of his time watching television upstairs (my territory) until I was so tired of Avatar-ian teen robots I thought about un-sabotaging his box and sending him back downstairs.

He is not the kind to go 10 hours and die from dehydration. I have deduced that Ihoma may be avoiding personal relationships because he doesn't want to step outside of his comfortable X- universe or couch cushion.

Or is there a different problem here? Am I using either of the boxes to raise my kid while I am doing my own thing in another room? And the answer is... yeah, I might be - in which case, the problem is manageable. The one who needs to get off the cushion is me.

When Ihoma gets home from school today, I have a shelf that needs to be painted, and I have readied two brushes. He will probably have homework. Then, we may need to go to the mall... 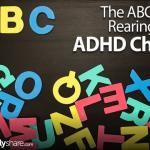 The Abcs of Rearing an Adhd Child