How to Find the Faith to Let Go

Jennifer is Afraid That Her Son Matt Won't Take the Right Courses in College. and so She Signs Him Up Herself Every Semester. While Jennifer Dutifully Calls Matt at Least Three Times a Week to See if He's Studying, She Leaves Nothing to Chance.

Jennifer is afraid that her son Matt won't take the right courses in college. And so she signs him up herself every semester. While Jennifer dutifully calls Matt at least three times a week to see if he's studying, she leaves nothing to chance. And so she checks in with his professors every month or two to make certain he's keeping up his grades. Matt has always been just a little irresponsible, Jennifer reasons. What would he do without her?

Tom's wife Kay let go of spiritual beliefs that they both once held closely in common. Tom was stunned. Who is Kay now? He wonders. Tom has argued with her until he's blue in the face, and she just won't change. Tom has finally decided that Kay is "sick" and that it's up to him to save her from herself.

Are Jennifer and Tom right? Can we make others do what we want them to do? And even if we can, should we? What if we're just trying to help?

Trying to control the behavior of others, no matter how well intentioned, springs from a place of fear, somewhere deep down inside us. Controlling is not the same as helping. Helping, when asked, is a very good thing. It's reflective of essential human feelings of love, service, and compassion.

To illustrate the difference between helping and controlling, consider these words cited in a blog written by Robert Burney: "I spent most of my life doing the Serenity prayer backwards, that is, trying to change the external things over which I had no control - other people and life events mostly - and taking no responsibility...for my own internal process - over which I can have some degree of control."

Mr. Burney has learned an important concept: We really have no control over the actions of others. And when we try to exercise control, we may end up crippling the other person, as Jennifer is likely to do with her son Matt; or simply frustrating ourselves and driving others we love away, as Tom is likely to do with Kay. Our own behavior is the one thing we can truly change. We can't force others to be who we want them to be.

Trying to control someone else's behavior may be the result of an unrecognized desire to keep ourselves valued or needed or loved. Sometimes we make ourselves OK by focusing on the problems of others, rather than trying to fix our own. We may even think that if others need us, maybe they won't leave us. This is not a healthy way to live our lives. It will only make us feel sad and anxious and cause those we love to resent us.

Instead, we place faith in both ourselves and others, and we learn to let go. We move on with our own lives. No matter how scary it feels.

In Jennifer's case, she might try to trust her son Matt to manage his own college course work. Even if he fails a course or two, which he might, as he waits to see if his mom will step in and rescue him yet again. (Jennifer should not feel obligated to pay for courses Matt fails.) How will Matt learn to succeed, if he never learns to fail?

As Henry Ford, founder of Ford Motor Company stated: "Failure is only the opportunity to begin again more intelligently." Ford was right, of course. We will always learn more from our failures than from our successes. We cannot, and should not, be afraid to fail or to allow others we love do the same.

And what about Tom? If Tom loves Kay, and their marriage is otherwise healthy, he might consider focusing on his own spiritual growth and that of his children, thus leaving Kay to decide what she wants for herself. Love and patience are really the only tools Tom has in his arsenal, in any event. Reacting to Kay as if she were sick will only serve to drive her further away from both him and things of the spirit.

"If you love something, let it go free. If it doesn't come back, you never had it [So move on!] If it comes back, love it forever." Doug Horton

*Names and some details have been changed to protect the identity of those whose stories appear in this article. 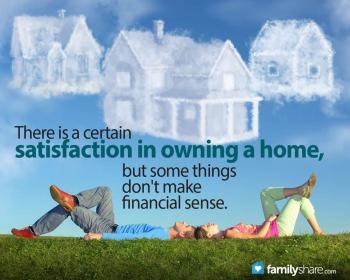 When Renting Rather Than Owning Makes Sense