How to get through your divorce with a good attitude

When I first started the divorce process, it was difficult not to feel negative and angry. Not just at my former spouse, but at the world, itself. The worst emotion was a feeling of worthlessness and helplessness.

When I first started the divorce process, it was difficult not to feel negative and angry. Not just at my former spouse, but at the world, itself. The worst emotion was a feeling of worthlessness and helplessness. I recognized that such feelings were not positive, but I had to put forth a fair amount of effort in order to avoid feeling such emotions. I found that a few things really helped me continue having a good attitude, and I hope they can help others, as well.

First, it is important to recognize that your former spouse is still a human being

Despite the betrayal and hurt you may feel in regards to a former spouse, it is important to remember the other person has value as a person. You do not have to like what the other person did, nor tolerate any abuse, but being able to see the former spouse as someone who has value and potential as a person can do wonders to help overcome feelings of bitterness and anger.

Adding to that, it is vitally important to recognize that you are a valuable human being yourself

Divorce often can tear down a person's self-esteem, and fill one with a sense of failure or worthlessness. It is extremely important to remember that while your marriage has ended, life itself does not need to cease having purpose. It is possible to move forward, it is possible to let the hurt of the past go, and to continue doing worthwhile things for the world.

Another important thing to do, though I admit it can be difficult, is avoid saying negative things about a former spouse in front of your children

Most importantly, find something positive to do, regardless of what you're going through

Especially when you are dealing with something difficult. Whether it is writing a book, searching for a fulfilling job, or volunteering in a worthy cause, finding something positive to do, will most certainly help anyone have a positive attitude.

Recognizing worth in one's self and others, avoiding negative thoughts, and finding positive, productive things to do can help us all remain positive while going through divorce, or indeed, any difficulty we face as we go through life.

Loralee Evans has written three books titled, The Birthright, The King's Heir, and The Shores of Bountiful. She loves teaching and being a mom.
nextarticle 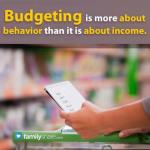 How to Create a Family Budget