How to Help a Child Make Sense of Death

Everyone Grieves Differently, and on Their Own Time Table. My Own Child Becomes Sad and Cries Every Once in a While For a Loved One Who Died Many Years Ago. I Do as Well.

My grand-kids, Karen and Lyle should have a little brother to play with. Little Calvin was still-born a year ago. Neither of the kids are at an age where death means much except in a video game or a squirt gun war:

"You can't shoot me because you're dead!"

Dead, for them, equals not being able to finish the game - which is close to being right, only on a different scale.

Of course no one has really tried to explain dying to them. The thinking is that when the kids start asking questions about death they are ready to work it out. Until that time, going to the cemetery to put up flowers is just another time to play with my son (their uncle). He throws them around and chases them through the cemetery with me yelling at them to chill out and show some respect - whatever that means to them.

It's hard to know what is going on in their heads.

Here are a few steps to help them process death and get them on a safe and kind path to understand their own existence.

Each child will have different ideas based on their age, understanding and experience. Once you have an understanding of how your child feels about the topic, you will be able to continue the conversation effectively.

Talk about it openly

This will work better with children that are a little older or more mature than with the younger ones. The child may emulate your own feelings about death and dying - at least the feelings you show. If you act as though you don't care, they may not understand why it is important. It's OK to show that you are sad and explain why. However, younger children may get more out of drawing about missing someone with a few crayons.

Answer any questions your child asks you

You don't need to be clergy or a doctor to know something of worth. It's OK to say you don't have the answer to a specific question, but remember the question and try to assist later.

Many questions do have answers. The question "why did my brother die" may not be as ethereal as it sounds. You might try something like, "His body just wore out." Keep it simple and plain.

Remember that any questions he comes up with may be a bit off the wall. Try to get to the root of the question or issue that is on your child's mind. For example, the question "Is grandpa a zombie now?" may indicate fear, or a lack of understanding of the burial process or the afterlife. It may be good to try to separate the body from the spirit or mind. "Brother's body was only part of him. That part gets buried. His mind and his spirit goes on," is something you could say. Of course, I base what I say on my own spiritual beliefs. Do the same if you have a belief based on your own understanding or religion. You have your beliefs for a reason. Let them help you and your child with the subject of death. Now is the time.

Let your child know that it is all right to love a person who has passed on. Show him or her a photo that you may have of a departed loved one and tell a story about her. Help the child understand that you love and miss that person as well.

Explain that everyone grieves differently, and on their own time table

My own child becomes sad and cries every once in a while for a loved one who died many years ago. I do as well. And don't assume that the child is unfeeling if, upon hearing of a death, she goes back to her TV program. Children may need time and space to process the information.

Just as there was nothing you could have done to prevent the passing of any other person. Don't let your child start down the "It was my fault" path. And, let the child see how you deal with the feelings of sadness and see you briefly process the grief.

Check back with him at a later time and refer to your conversation. He may have had a little time to process his feelings or to come up with a few questions on his own.

While conversing, don't act shocked at a question that your child may ask. TV has made self-imagined "experts" of us all on the science of death. Don't say, "Where on earth did you get that idea!" or "Why would you ask such a bizarre question?" Your child may be testing you and your honesty, or your ability to help. Don't fail him now. 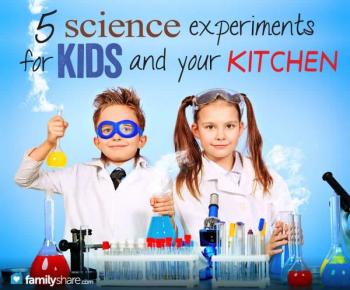 5 Science Experiments For Kids and Your Kitchen