How to keep smart girls smart

There is an opportunity to keep our smart girls smart and grow them into successful women. In doing so, there are a few behaviors that need to be enforced and a few that need to be avoided.

There is little dispute that women in male-dominated professions are at a disadvantage. Often, they are underpaid and undervalued. They generally have to work twice as hard for recognition.

But the struggle begins much earlier and from within. At some point, it is likely enforced from outside influences.

Heidi Grant Halvorson, Ph.D., specializes in social psychology. She recently stated in an article in Psychology Today, that today's successful women were more than likely very bright fifth-graders. At that stage of development, girls usually outperform boys in routine studies, including math and science. The distinction in achievement comes when they are given difficult or confusing tasks.

Psychologically, boys see these as an exciting challenge and they actually rose to the occasion, finding it stimulating.

Girls, on the other hand, began to doubt their ability to handle the challenge. In fact, she points out, the higher the girls' IQ, the quicker they were to give up, losing self-confidence.

It's all a matter of perception - how they interpreted the tasks. She notes, "More often than not, bright girls believe that their abilities are innate and unchangeable, while bright boys believe that they can develop ability through effort and practice." This all happens around puberty.

This transition is often compounded from external influences. There are certain phrases that should be removed from our language.

A number of great commercials in the media are currently addressing this issue. Among these phrases and ways of thinking are:

Telling someone, either male or female, that they run/throw/hit/think or anything else "like a girl," somehow, on some level, makes it sound like a bad thing. In one commercial, girls were asked to do something like a girl and their performance was exaggeratedly awkward. When asked to re-think it, they showed marked improvement.

"Leave that to the boys."

Telling girls they can't handle power tools or complicated tasks diminishes their self-confidence. They should be allowed to try new things, take things apart and figure things out on their own without any negative influence. One commercial points out that 66 percent of all fourth-grade girls say they love math and science, but only 18 percent of college engineering majors are women.

Why shouldn't they? Exploring nature, digging in the dirt, playing rough are not gender specific activities. Instead of making sure their clothes are all pink and ruffly, what if we made certain they had old play clothes on hand to do grubby things in.

"This project is getting out of hand."

Girls obsessing over science fair projects or other detailed tasks should be encouraged. Telling them they should take time out to do some shopping or hang out with their friends instead of getting so involved in school and studies is degrading. Encourage them to excel.

"Don't worry your pretty little head about it."

The unspoken part of that screams, "because it's filled with fluff." Sparing girls the opportunity to challenge themselves or work through problems is denying them the chance to develop reasoning skills and problem-solving abilities. Instead, let them know that you believe in their ability to work out solutions.

Whether academic, athletic, or plain, old-fashioned inquisitiveness, girls should have the same allowances as boys in their growth and development.

Take the time to recognize the changes she is going through in the pre-teen years and reinforce your faith in her abilities. Continue to support her passions and interests throughout her teens. When she becomes a woman, tell her there isn't anything she can't do if she applies herself.

It's time to remove the labels and give our girls a solid fighting chance to be the best they can be. 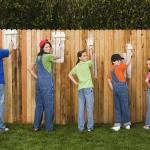 The Rewards of Value-Based Living