How to ‘Live’ the Scriptures

By Making Conscious Efforts to Lend a Hand, Start Conversations, and Maintain Good Priorities We Can Bring God into Our Lives, and Those of Others, by Living the Scriptures.

In April 2013, religious leader, Enrique R. Falabella, recounted an experience he had as a newlywed. At the time he considered himself fairly well-versed in the teachings and knowledge of the scriptures and made efforts to share that knowledge with his wife. However, it soon became apparent to him that while his study of the scriptures was good, his wife was one step ahead of him, "I may have tried to teach her the gospel, but she taught me how to live it [original emphasis]." His observance of her serving others taught him the importance of actually living the teachings he was so familiar with.

It can often be easier to read the scriptures in the comforts of our own homes as opposed to living them by sharing our time and talents with others. However, it is usually these very acts that are so beneficial in the lives of those around us. The following are some examples of how ordinary people have taken their circumstances and blessed others by living the scriptures.

. Katie, a single-mother, returned home from work to find her basement covered in several inches of water; the culprit being a broken sprinkler pipe. As she considered the enormity of hauling everything out of the damaging water's way and the task of fixing the broken pipe, she felt overwhelmed. Fortunately Katie counted her neighbors as her friends. Once one neighbor realized her plight the word spread quickly. In a few hours, this struggling woman went from being overwhelmed by water to being inundated by people living the scriptures. By the end of the day, her basement had been cleaned out by individuals who lived the creed of loving their neighbor as themselves (Mark 12:31).

. Living the scriptures can be as simple as making a telephone call. Beth often had people come to her mind as possibly needing a friendly chat so she often called them. Making calls to these individuals (many of whom she was only slightly acquainted with) put her out of her comfort zone, she still persevered. Liz, a recipient of one of Beth's calls, was going through a particularly discouraging period in her life and was feeling drained and overwhelmed. The phone call she received one day from Beth helped cheer and comfort her. Although her trials did not disappear, Liz received the consolation promised in the scriptures (Matthew 5:4) through the comfort she felt from Beth's love and friendship.

. Isaac, a talkative 5-year-old, was constantly a recipient of Daycie's actions of living the scriptures. A friend of his mother's, Daycie made Isaac feel so loved that he told all who would listen that she was his special friend. Every time their paths crossed, Daycie patiently listened to his stories as she reprioritized her time in order to spend a few minutes with him. Daycie epitomized letting this small child come to her, (Luke 18:16) as she made showing her love for Isaac a priority.

Throughout each day, we find ourselves with opportunities to live the scriptures, which is all that is needed for us to make the most of each instance. Whether these opportunities are simple or time-consuming, each act of service we perform helps those around us and brings us closer to God. 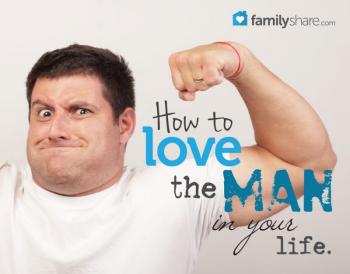 How to Love the Man in Your Life