How to overcome religious differences in your relationship

Even when we disagree, we should not be disagreeable. Learn ways to find peace in interfaith relationships by following our Savior's example.

The church meeting had an open mic. Anyone who wanted could stand in front of several hundred people and say whatever he desired. I smiled proudly as an 8-year-old girl I taught in my little Sunday class made her way bravely to the pulpit. She stood for a moment as tears pooled in her eyes. Then, from the bottom of her giant heart, she spoke. She cried as she said how much she loved her father and how she wished he would come to church and be baptized. I looked around the chapel, hoping her father wasn't hearing her heartfelt pleading, thinking he might be embarrassed by being singled out. I found the big man in the back, shoulders hunched, looking at his shoes.

I knew this little girl. She talked often about praying for her father and wished he believed what she and her mother believed. Like many homes, her parents had different religious beliefs, an interfaith marriage.

Loving others feels like a commandment that is easy to keep - that is, until we discover that our new husband's family doesn't celebrate Christmas - our favorite holiday - or doesn't agree with us on deeper religious values.

As parents, working together in agreement on how to raise your family is key to your family's success and happiness. So how do we live with a spouse or partner that has different religious beliefs or values than we do? If you are a Christian, how do you stay a Christian and avoid contention on holidays, Sundays or anytime religion enters a conversation and tensions rise? Here are ideas collected from religious leaders and scriptural references.

Be a peacemaker, avoid contention and love others. Give others the respect you wish they would give you.

The Christian faith is named for Jesus Christ who, during the Sermon on the Mount, said, "Blessed are the peacemakers for they shall be called the children of God (King James Version)." Core Christian teachings and beliefs are based on love and forgiveness. Shouldn't we practice those beliefs in our own homes? The Savior asks us to turn our hurts, fears and broken hearts over to Him and love each other - where we are and as we are. He asks us to pray for each other and trust Him to heal our hearts.

In Ephesians 4:14-15 (KJV) we are told to remain steadfast in our beliefs and speak "the truth in love." We are to be peacemakers who openly practice our faith. You can love others where they are and how they are without condoning all their choices. Agree to disagree while sharing the good you have in common.

Do not compromise your beliefs or values.

In an effort to keep peace, do not give up your values and beliefs. Remain strong and unwavering in your commitment to the truths you believe in. Allow your partner the same respect. For example, if you belong to a religion with a health code forbidding alcohol consumption but are married to someone with different beliefs, you can continue to abstain from drinking while going to dinner with your spouse. You and your spouse can discuss how you plan to handle alcohol as parents so that you avoid sending mixed messages to your children.

Be kind and patient

Dallin H. Oaks, attorney, religious leader and winner of the Canterbury Medal for "courage in the defense of religious liberty," recently spoke about the importance of working, living with and loving those whose religious values and beliefs do not match our own. He said, "The gospel of Jesus Christ and the covenants we have made inevitably cast us as combatants in the eternal contest between truth and error. There is no middle ground in that contest."

Then Oaks shared an example of a woman who had, for years, wished that her husband would join her church.

Oaks said, "... (She) told me that her non-member husband had been accompanying her to church for 12 years but had never joined the Church. 'What should she do?' she asked. I counseled her to keep doing all the right things and to be patient and kind with her husband.

"About a month later she wrote me as follows: 'Well, I thought that the 12 years was a good show of patience, but I didn't know if I was being very kind about it. So, I practiced real hard for over a month, and he got baptized'... Kindness is powerful, especially in a family setting."

As a couple, create a list of what you have in common. Plan a way to respect both your religions. For example, if you are Jewish and your spouse is Christian, plan to celebrate both Hanukkah and Christmas, or try taking turns, celebrating your holiday every other year.

Know your boundaries and stand firmly for your beliefs

There are times when we are unable to compromise our beliefs. For example, if your religion does not believe in premarital sexual relations, you may choose not to compromise those beliefs. Respect for each other's beliefs may mean sacrifice on both sides.

Discuss your differences and things you have in common

Make a parenting plan that respects both partners' beliefs. Come to an agreement about how you will parent with your differences.

So, what happened to the family of the little girl from my Sunday class? About a year later, I saw the same big man who had sat, shoulders hunched, in the back of the church while his daughter spoke about her wish to see him baptized. He stood at the pulpit, humble and full of joy, following his baptism. He cried as he told how his 8-year-old daughter's love had changed his heart. 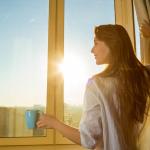 10 Things Successful People Do in the Mornings