How to protect your children from school violence

Teach your children to be school-street-smart by encouraging them to know who to avoid. They should be aware of their environment, understand the importance of traveling with a battle buddy and how to defend themselves if they are being attacked.

By Dustin A. Wiggins

Imagine the little hands of a child wrapped violently around the neck of your son or daughter. This was an experience in our family when my three year old son was playing with a four year old girl. With both hands, she grabbed him by the throat and began to shake him. The children were quickly separated and the mother of the young girl became extremely embarrassed. I was shocked at the thought of having to teach my three year old basic principles of self-defense.

Our children are faced with various forms of violence as soon as they begin to interact with others. It's easy for us to quickly respond and correct that kind of behavior when we see it. However, we cannot easily protect our children from becoming the victims of violence or from being the instigators of it while they are away from us.

Set an example in the home

Where would a child learn this type of behavior, maybe television or movies that promote violent behavior? Maybe the child witnessed a tragic scene of domestic violence at home? It is not okay for someone to hit another person. Children will see this type of behavior and think that it is normal and acceptable. If we all embrace the idea that violence is only for the defense of ourselves and others, there would be no need for it.

There are four things that you should teach your children at home to protect them from school violence.

1. Know the people and groups to avoid and when to avoid them

Knowing your enemy is half the battle. When your children are aware of those that delight in causing trouble, where they hang out and when they hang out there, they know what to avoid. By encouraging your child to be observant to the different social groups at school they will be able to safely navigate their campus. Invite them specify the danger areas in and around their school.

2. Pay attention to what is going on around you

Violence can erupt at any time and in any place. Encourage your children to take notice of what is going on around them. Look into people's faces; are they happy, bored or scared? What is the pace of the students? Does it look like business as usual, are they are running away from something or gathering in a large circle? Occasionally take note of what people have in their hands. If you see something suspicious report it.

3. Operate with a battle buddy system

Bullies attack those they feel are easy prey. Teach your child to have a battle buddy as they travel to and from school and even between classes. Traveling in groups can help deter a bully from causing your child problems. Teach your children to avoid walking alone especially in the danger areas.

4. Learn how to protect and defend yourself

Violence should never be glamorized. Unfortunately, it should be learned for the purpose of defending ourselves and those who cannot or will not defend themselves. Locate free resources in your area that will teach basic principles of self-defense. Look on YouTube for tutorials that will help walk you through basic self-defense techniques. Practice with your children and talk openly about when using violence is okay and when it is not.

Create an environment of peace and love at home. The time you spend with your children, your example and teachings should be a source of strength and confidence for them. Teach your children to be school-street-smart by encouraging them to know who to avoid. They should be aware of their environment, understand the importance of traveling with a battle buddy and how to defend themselves if they are being attacked.

About Dustin A. Wiggins

Dustin A. Wiggins, author of 180 Experiences that will Strengthen your Marriage, is passionate about discovering ways to strengthen the family. He loves to write and explore different parts of the world. You can follow him on twitter @_DustinWiggins or check out his blog Lessons of Wisdom to stay updated with helpful and inspiring ideas.
nextarticle 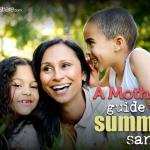 A Mother's Guide to Summer Sanity