How to protect yourself from Tot Kwondo

After experiencing injuries at the hands of my toddler, I suspect that children are born with instinctive knowledge of "Tot Kwondo,"ť a pint-sized version of the Korean martial art of Taekwondo.

Before I got into the motherhood game, I didn't suspect that I would constantly need to defend myself physically against my little cherub. Who would have thought that your sweet bundle of joy could also be your assailant? However, after the injuries I've suffered at the hands (plus feet, head, and teeth) of my daughter, I've come to believe that children are born with instinctive knowledge of what I call "Tot-kwondo,"ť a pint-sized version of the Korean martial art of Taekwondo.

Taekwondo loosely translates as "the art of kicking and punching". As a baby, my daughter exhibited fantastic footwork as she twisted and squirmed when I was trying to stuff little legs into clothing. Her dexterity would impress Chuck Norris. Gabby Douglas would admire her flexibility. This Karate Kid didn't even need to train with Mr. Miyagi.

Anyone who holds a baby learns the hard way not to keep their nose in the danger zone behind the infant's head. And you can't really stay angry with her after she bonks your nose since she's just so darn cute, as she gurgles at you with a toothless grin.

As she grows, there come more battle scars; from bites, scratches, sharp little elbows jabbed into sensitive places, pinches, kicks, and being hit with thrown objects.

For some reason, my daughter seems to have a vendetta for my left eye. It started when she was two. The girl slipped off the back of the couch she was crawling along. She got wedged into the space between the couch and the wall. As I was struggling to extract the frantic girl, she threw her hand out with lightning speed and her fingernail grazed my eyeball. The next few days enduring that scratch were most painful.

For months afterward, the child showed an uncanny ability to throw an appendage to the precise spot that would reinjure the eye. Then, more than a year later, she was holding a wooden dowel. "Mommy, look at this!"ť she said, and lowered the rod onto my left eye. With a feeling of dĂ©jĂ  vu, I endured more days of searing pain, wearing a pirate-like eye patch. Arrgh!

My daughter also loves to jump on the bed while holding my hands for stability and greater air time. I've learned what happens when you get too close, and the force of the little skull impacts your chin. Talk about seeing stars.

Most parents can tell stories of the wounds they've suffered at the hands (plus head, feet or teeth) of their child. My older sister told me of a time my mom was holding one of my brothers when he was a baby. He was playing with a toy hammer and flung it up over his head, hitting mom in the teeth. I'm not sure if she needed dental work after that.

Some Tot Kwondo attack methods include these classic moves.

The errant elbow: This formidable weapon can cause great pain to the soft parts of the parental unit. Kids will throw their elbows back at any time to push themself up, or press those pointy elbows down on your legs, which incapacitates you instantly.

The flying kamikaze hug: My daughter randomly explodes with, "Huggies!"ť and flings herself at me with arms wide. I love these spontaneous hugs, but they risk injury to me. It's also hazardous for my daughter if I am pursuing my hobby of knitting, since she doesn't look before she leaps.

The challenge becomes protecting yourself while still showing love for your child. I'm not suggesting that anyone can get through parenthood unscathed, but you can minimize the damage. I encourage parents to apply a few simple defense techniques.

First, maintain the mindset that your adorable child is potentially lethal and you must be vigilant in protecting yourself.

Practice keeping a barrier between you and the tot to protect your body. For example, I learned to keep a hand raised between my face and my daughter's head in case she makes a quick move to twirl her hair.

When standing, adopt a "Ready Stance"ť, in which your feet are shoulder width apart, arms lightly bent and muscles relaxed, ready to spring into action when arms and legs come flying. Vary this by practicing the "Back L-Stance"ť. Turn your body to present your side to the child. Putting most of your weight on your back leg will let you use your front leg for a quick defense without losing your balance.

A "Low Block"ť is performed by keeping one arm bent and raised to shoulder level, then snapping the arm straight down with the palm facing the ground to block incoming hits from flailing appendages during a tantrum.

Take precautions to avoid potential impacts. I learned to keep my chin turned to the side while holding hands with my bed-bouncer. I walk behind when she's riding a bike or scooter. I stand to the side, not directly behind, when pushing her on the swing.

Since self-defense skills don't come as naturally to us parents as the attack skills come to your small fry, you need to practice regularly to improve your reflexes. Maintain mental sharpness by always being on your guard. I hope this helps you to be more prepared, mentally and physically, to defend yourself against your precious progeny. If I can prevent just one painful eye gouge, one excruciating chin bump or one agonizing elbow jab from a tot-kwondo practitioner, it will be worth it.

Ruth Hendricks is a graduate of the University of Utah, residing in West Jordan. EMAIL: ruthhendricks@msn.com
nextarticle 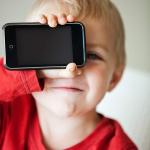