How to Talk to a Child Who Has Witnessed Abuse

Children Witnessing Abuse Often Love and Care About the Abuser and Believe They Can Stop the Abuse.they Blame Themselves When They Can't. Learn Ways to Heal Broken Hearts and Help Children Find Peace When They Have Been Living in a War Zone.

"I tried to stop him. I should have been stronger. He wouldn't have hit Mom if I could have stopped him." I heard many statements like this during my 15 years as an Advocate responding to the scene of domestic abuse with law enforcement. Each child was sure that they could have stopped the abuser if only they had done things differently. They tried to take away guns, were thrown down stairs and run over.

One young man had been seriously injured as he tried to put his 10-year old body between the abuser and his mother. Several years later when he was in his 20s we talked about the abuse. I explained once more, "It's not your fault. You were 10-years old." He still tried to think of ways he could have stopped the abuser. "Have you looked at a 10-year old lately?" I asked him. When he realized how small he had been, he finally began the long journey to letting go of the responsibility for his mother's abuse.

It is not your fault

After hundreds of conversations with children who have witnessed abuse, I have learned that the first thing a child needs to hear - over and over again - is, "It is not your fault." We read children stories and show them movies about young children who become mighty heroes in capes or magic princesses who save kingdoms. Every child believes in magic. He is sure there is a way for him to win because every story has a happy ending. Children need to be told that unlike the fictional characters, they not only can't stop the abuse, but it is dangerous for them to try.

I can protect you

Children need to know that you can keep them safe. When a child sees her parent getting assaulted she may take the blame and wonder what she did to make the abuser so angry. She may start trying to be quieter, cleaner or do something, anything, to protect the victim. Just like an adult victim trying to keep the peace. Sometimes, the adult victim will even ask children to help keep the peace by asking them to go to bed, stop fighting or be quiet so they, "Don't make daddy (or mommy) mad." Do not give a child adult responsibility.

There is no excuse for abuse

. Daddy or Mommy didn't hit because they were drinking, poor or stressed out. He or she chose to hit and when you choose to do things that are wrong, you suffer the consequences. When children hit, they sit in time out. When adults hit, sometimes they have to take a time out too. When a child witnesses a parent being arrested or leaving the home, using the term 'time out' is a great way to explain it at a level that makes jail a little less frightening.

Abuse is not normal

Children need to know that abuse is not normal. Even though it may be happening in their home or a friend's home, it doesn't happen in every house. Tell children many people get angry and don't hit each other or yell at each other.

You don't have to keep secrets

Children who have witnessed abuse are taught by example to keep family secrets. Even though you want them to have healthy boundaries and only share when appropriate, you want them to know that there are safe people like school counselors, therapists, clergy and family members that they can and should talk to.

It is O.K. to love the abuser

The abuser is usually a family member that is loved by both the victim and the child. It is important that you do not discuss the abuser or share anger towards the abuser where a child might hear. Abusers are not usually abusive 100% of the time. Sons may have great memories hunting with Dad, and be sad, even when the same gun is pointed in their direction.

Children need to have hope. The truth is that the majority of children who witness abuse or are victims do not grow up to be abusers.

The following are links to additional information on talking to children who witness abuse:

Talking to Children about Domestic Violence and Abuse by the ADVA Partnership
Healing the Invisible Wounds: Children's Exposure to Violence

When you listen to children suffering because they love someone who has been hurt, or love someone who hurts others, it will make you wish for a cape or magic wand. It takes great courage to break the silence and get help for children. It requires we hold abusers accountable.

Hot Peach Pages is a list of abuse hotlines for almost every nation and city in the world. 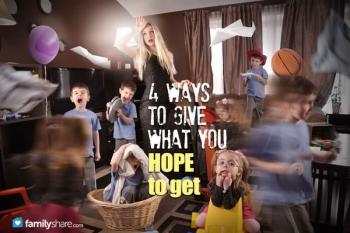 4 Ways to Give What You Hope to…