Worried About Talking to Your Child About Consent? Here's a Quick Guide on How to Do It, Broken Down by Age.

Juleyka Lantigua-Williams, like many other Americans, had a tough time reading the letter a Stanford University sexual assault victim read to her attacker in court a few weeks back.

What made it most difficult for Lantigua-Williams was that she has two boys, and she's terrified of ever seeing them in a similar situation as the attacker.

"My body recoiled at some of the graphic descriptions of what he did to her behind a dumpster. But it was my mother's instinct that sent my mind reeling as I thought about my two sons - ages 4 and 6 - ever finding themselves in such a gruesome situation," she wrote for The Atlantic.

She also read the letter aloud to her husband, who was similarly put off by it. She could tell that he was also thinking about their sons, hoping that they wouldn't ever do what the Stanford attacker, Brock Turner, did.

After reading the letter, Lantigua-Williams and her husband agreed that their boys - a 4- and 6-year-old - could never become this way and that they needed to teach their sons to be better.

"My husband, who is gentler and kinder in ways I can only imitate, recited all the ways we have already taught our sons to respect other people, especially women," she wrote. "He reassured me about the closeness that binds our family of four, a bond that makes our little tribe the safest place for our children and for us."

This is something that a number of American parents are trying to figure out - how to properly raise their children to care about consent and not allow their youngsters to find themselves in dangerous sexual assault situations.

Lantigua-Williams has looked to teach her children about consent and proper behaviors towards women through example. She learned early on in her childrearing that she had to show her young boys proper behaviors in order for the youngsters to fully understand them.

She said she and her husband need to do the same when it comes to respect towards women by showing respect in the home. When the boys are older, she wrote, they can have informed discussions about attraction, permission and consent.

"Until then, my husband and I plan to model and repeat the expectations we've set for our family," she wrote.

Lantigua-Williams's plan to change her strategy as her children get older isn't such a bad idea. Joanna Schroeder, Julie Gillis, Jamie Utt and Alyssa Royse of The Good Men Project, a web platform that offers positive insights into fathers and men, recently published a piece for The Huffington Post that outlined how parents can talk about consent and proper behavior by age.

Here's a look at the advice they gave based on age, along with some other expert advice about talking to your children about consent.

It's really easy to start talking to your youngsters about consent, according to Gillis, Utt and Royse. Start by telling them to be respectful of their playmates and to ask permission before they touch them anywhere during playtime.

It also may be important to teach empathy, they explained. By feeling bad for other children, and helping other youngsters who may be in trouble, they will care more about how other children feel, making them also likely to do so as adults.

Parents also shouldn't force their children to hug, touch or kiss anybody, the experts said, as it creates a standard that they have to follow these actions every time.

"You can always explain to Grandma, later, what you're doing and why. But don't make a big deal out of it in front of your kid. If it's a problem for Grandma, so be it; your job now is doing what's best for your child and giving them the tools to be safe and happy, and help others do the same," the experts explained.

Rebecca Branstetter, a child and adolescent psychologist, told PopSugar that parents should encourage their children to talk openly about their bodies and make sure their youngsters know their body is theirs and theirs alone.

Gillis, Utt and Royse said it's important to teach older children that body changes can be confusing, but it's always necessary to talk openly about those changes. These children should openly talk about what changes they like and what they don't like, too, so that they're being honest about their feelings and body.

This is also a good age to teach children about safe words. If they're roughhousing with friends, having a safe word can inform others that they're uncomfortable, one anonymous reader told The Atlantic.

Branstetter told PopSugar that older children should also be taught not to withhold secrets from their parents. Talking openly about any dangers can create a better relationship between parent and child in the future.

"This removes the burden of a child having to decide if someone is being inappropriate or not, which can go beyond their skills," Branstetter told PopSugar. "Instead, teach them that if anyone ever asks them to keep a secret about touching their bodies or having them touch someone else's body, they should tell you right away and they will not be in trouble."

For this age group, the Good Men Project experts suggest parents constantly have talks about sex, consent and abstinence when they get older, as teens may find themselves more interested in sex and have questions about it.

This also may be a good age for young adult men to receive counseling and mentorship about what masculinity means and how culture views masculinity. Understanding these views can help them be more knowledgeable about how to treat women and which stereotypes they want to beat.

Like sex, this may also be a good age to start talking to your child about alcohol and how that plays a factor in sexual scenarios, as teens may be tempted to drink, too.

"Parents can also discuss how alcohol impairs people's decisions to consent or know if someone is consenting, but ultimately, actions under the influence of alcohol are not exempt from responsibility," Branstetter told PopSugar. "Again, parents may not always feel comfortable with the discussion, but if they don't teach their kids, then chances are their friends and the media will, and the messages will be rife with misinformation." 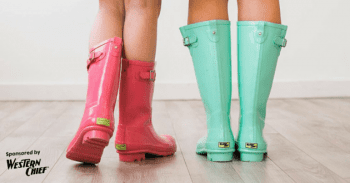 Quiz: What Does Your Favorite Footwear Reveal About…