How young is too young to be left alone?

Would You Let Your Children Ride Public Transit Alone?

Do you use public transportation? Do your children ride the city bus? Is there an age that children ought to be able to ride the bus or other public transit alone?

How young is too young?

Adrian Crook, father of five, taught his four oldest children (ages 7-11) to take the Vancouver public bus to school every day. Part of his reasoning is because he wants to "raise capable, independent humans."

But the Ministry of Children and Family Development (the equivalent of Child Protective Services) ruled against Crook, stating that children under 10 have to be supervised, and a child has to be at least 12 years old to watch younger siblings without a parent or other responsible adult present.

Crook began training his kids back in 2015 how to ride the bus alone, starting with riding the whole ride with them and then only riding part of the ride with his children to allowing them to take the entire trip by themselves.

"I've happily invested countless hours riding the bus with them, coaching them and answering their questions to ensure they're capable transit riders ... Our 45-minute bus ride is straightforward. It begins with a bus stop visible from my living room window and ends at a stop directly in front of the kids' school," he said.

He asked their regional transit operator if there was a certain age children had to be in order to ride alone - there wasn't one.

An anonymous report about Crook's children riding the bus unsupervised led the ministry to look into the Crooks' lives, questioning Crook and each of the children.

After their investigation, they determined Crook was not guilty of negligent parenting and had indeed done more preparations for safety than many parents do. However, Crook is now required to supervise his children any time they are outside the home, or risk losing joint custody of his children, which he shares with his ex-wife.

Whether you're leaving a child home alone, allowing them to ride a bicycle or walk around the neighborhood or letting them ride public transportation unattended, it's best to make sure you know what legal age children can be left unsupervised in your area.

The law is not enough. Sometimes age proves maturity, but some "legal" aged kids may not be able to handle the responsibility yet. Additionally, there are many risks of leaving children to care for their own well-being. Risk of fire, severe injuries or accidents or other dangers can occur even inside the home.

If a child is on their own outside the home, people who may seek to abduct or abuse a child has a size and power advantage over a child. Thus, even if maturity and training dictate a child may be able to safely navigate from point A to point B, that doesn't negate the chance that something bad could happen.

The world is wonderful, but it can also be dangerous. Though we shouldn't live in fear, we must be wise with parenting and teaching our children how to stay safe. Sometimes that means they can go alone, while for others it means they must be accompanied by an adult. Kids have to be taught basic and more specific safety routines before they can be fully responsible for themselves.

What boundaries have you set for your children? Do you let them use public transportation alone? Are they free to roam the neighborhood unsupervised? Have you taught them to be "street smart" and how to stay safe? How young is too young to be left alone? 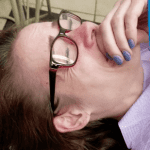 Girl's Ex-Boyfriend Broke Her Front Tooth, But When…